ACP Recommends Actos Be Used Only As Last Resort 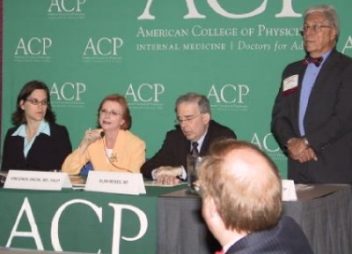 The American College of Physicians is urging newly diagnosed type 2 diabetes patients to steer away from Actos and other heavily advertised, expensive diabetes drugs in favor of tried and true methods.

The group, which represents primary-care doctors, said other drugs, including metformin, are more effective and cheaper than Actos (pioglitazone). A month of metformin costs about $14 compared to about $200 for Actos. Other drugs also come with a better safety profile.

The announcement comes as evidence mounts against Actos and its link to bladder cancer, heart failure and bone fractures, among other things. Nations around the world have already severely limited access to Actos or included grave warnings on the drug’s label regarding its side effects.

The college said that patients are unduly influenced by advertisements that lead them to think certain drugs are without risks or simply better. Indeed, when Actos was introduced to the market in the late 1990s, Takeda Pharmaceuticals, the drug’s maker, touted its safety over competing diabetes drugs.

“In these days of crisis in health care costs, the medical profession should take its ethical and professional responsibility to do what we can to reduce costs while not compromising care,” said Steven Weinberger, the college’s CEO.

Dr. John Santa, who heads up Consumer Reports’ health rating center, said that metformin has been proven to work effectively. Other drugs, including Actos, include a host or risks and side effects.

“So here’s an example of an inexpensive, older drug, which the evidence has shown is the better choice,” Santa said of metformin. “We are jointly committed to putting the brakes on over-testing and over-treatment, and we agree that consumers will benefit when either patients or doctors initiate conversations about these delicate issues.”

The news from the college and Consumer Reports came during the college’s annual scientific meeting in New Orleans. Interestingly enough, in a courtroom just a short drive away former Actos patients have lined up by the hundreds to bring legal claims against Takeda Pharmaceuticals.

In the U.S. District Court in Lafayette, Louisiana, hundreds of Actos victims have joined in a multidistrict litigation (MDL) to sue Takeda and its subsidiaries. Patients, many who were stricken by bladder cancer after taking the drug for longer than a year, are attempting to recoup financial losses that accompany a serious illness.

At the same time, patients have filed suit against Takeda in California and Illinois state courts. All of the cases have been moving forward through the discovery phase.