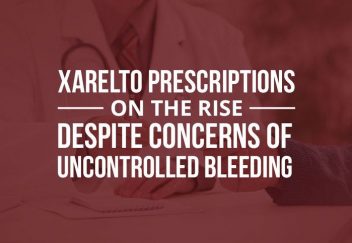 Researchers recently found that prescriptions for the blood thinner Xarelto are rising despite the fact that the number of serious adverse events related to the medication are also growing.

The Institute for Safe Medication Practices (ISMP) found that more doctors are prescribing Xarelto (rivaroxaban) over its rival Pradaxa (dabigatran). Both medications carry potentially dangerous side effects, including Xarelto’s links to uncontrollable bleeding and death.

Xarelto prescriptions increased to about 1 million per quarter, while Pradaxa prescriptions have steadily declined since they peaked in 2012, the ISMP reported.

By the end of 2013, the number of Xarelto prescriptions outpaced Pradaxa by about two to one, according to ISMP research.

Xarelto, an oral anticoagulant, was approved by the U.S. Food and Drug Administration to prevent dangerous blood clots, specifically in patients who had knee or hip replacements and those who have atrial fibrillation (irregular heartbeat). It also enjoys FDA approval for the treatment of pulmonary embolisms and deep vein thrombosis.

Manufactured by Bayer and Johnson & Johnson’s Janssen Pharmaceuticals, the medication is prescribed in a uniform single-pill dose. Unlike its rival warfarin, a go-to anticoagulant for decades, there is no emergency antidote in the case of internal bleeding or hemorrhaging.

Uncontrollable bleeding could cause one or all of the internal organs to stop working. Xarelto manufacturers have not told doctors how to control the bleeding.

While there is growing concern about Xarelto’s side effects, the drug’s manufacturers are looking to expand its use to patients with acute coronary syndrome (ACS), peripheral artery disease and embolic stroke of indeterminate source. Bleeding issues are the primary reason for a growing number of lawsuits filed against Bayer and J&J related to the medication.

Bayer and Janssen recently announced the start of a new clinical trial for patients who are considered high risk. The worldwide research will include more than 15,000 patients to determine how the drug reacts.

In early 2014, the company also launched clinical trials to study the Xarelto effects on the treatment of pulmonary embolism and deep vein thrombosis. The study will look at the effects of the drug for reducing the risks of either medical condition due to a concurrent illness for up to 45 days after a hospital discharge.

Results from the study follow multiple rejections by the FDA’s Cardiovascular and Renal Drugs Committee for Xarelto’s use in ACS patients. In May 2012, the committee rejected expanding the drug’s usage, citing insufficient clinical data. In early 2014, the FDA and the committee again said not to a request to expand the drug’s use.

To date, many family members of patients who died as a result of Xarelto have filed lawsuits against Bayer and Johnson & Johnson. They say the drug caused uncontrollable and irreversible bleeding that caused death.