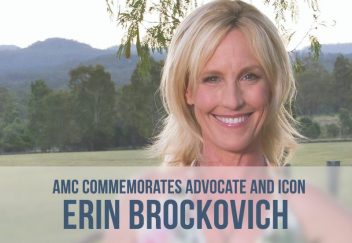 There’s nothing like an anniversary or commemoration to remind you about things you take for granted or people that have inspired you. The AMC movie network pays tribute to die-hard consumer advocate, Erin Brockovich. I still remember watching Julia Roberts portray Erin Brockovich for the first time. The movie came out in 2000, but its themes still ring true. It is the true story of a down-to-earth single mother of three who stood up for those injured by the nefarious business practices of a big company, Pacific Gas & Electric (PG&E).

It is a classic David vs. Goliath story, inspiring and moving – and yes, infuriating.

It turned Erin Brockovich into a heroine and put a spotlight on corporate oversight.

At the time, I didn’t think anything like this could be real. I didn’t think there really was an Erin Brockovich or that big businesses could withhold such crucial information from the public. The villain in the film was PG&E, a power company whose plant leaked toxic chromium-6 into ground water that supplied the town of Hinkley. The after-effects were devastating. Entire families were stricken with cancers and other terrible ailments. The company withheld the information, covered it up and went so far as to tell the residents of the small town of Hinkley that the chromium was actually good for them.

It turns out corporations do this kind of thing more often than we know, and according to Brockovich, the movie is pretty accurate.

“People ask me all the time, is the movie true and accurate? YES, the movie was true and probably 98 percent accurate. They took very few creative licenses,” Brockovich says on her website.

Part of what was so moving about the film was the heart-felt look at the lives of individuals and their families affected by PG&E’s covering up the occurrence of the polluted groundwater. These families were people who never suspected their drinking water was killing them.

As a researcher for Drugwatch, I’ve seen my fair share of cover-ups. And much like Brockovich, I’ve spoken to several people who were victims of negligence or deception on the part of drug and medical device companies and even lack of action on the part of the Food and Drug Administration (FDA).

Many of these people’s lives were changed forever by drugs and devices they were told would make them healthier.

Brockovich describes herself on her site as “a modern-day ‘David’ who loves a good brawl with today’s ‘Goliaths.’ ”

Some of today’s Goliaths include pharmaceutical and healthcare giants that spend big money on crafting a wholesome image while quietly downplaying lawsuits filed against them by people claiming injury from their products.

Drug companies like Johnson & Johnson, GlaxoSmithKline and Zimmer Orthopedics tout their products as safe and reliable, while people have filed complaints against these companies about serious birth defects, failed hip and mesh implants, cancer, uncontrolled bleeding and other life changing injuries – and some have died as a result of their injuries.

Lawsuits filed by women injured by transvaginal mesh implants now make up one of the largest torts in U.S. history.

Before she was an advocate and heroine, Brockovich was a single mother just trying to provide for her children. She ended up working for Masry & Vititoe, the law firm that represented her in an auto accident, after she asked for a job. The work she did uncovered medical records from residents of Hinkley and the investigation continued.

The case ended up yielding $333 million dollars in damages to more than 600 residents, and it was the largest toxic tort payout in U.S. history.

Even after that settlement, Brockovich didn’t quit doing the work she began. The courageous advocate continues to fight on behalf of those who suffered at the hands of corporations and Big Pharma.

Some of the projects she currently works on include environmental issues such as the gulf oil spill, Wake Forest TCE contamination, workers comp issues and a number of drug and medical device problems.

For instance, she is currently collecting stories of women affected by the birth control device, Essure. Some complications of the device include infertility, severe pain, hysterectomies and device migration.  “It is a woman’s right to decide for herself if she wants a certain form of birth control, but when they are NOT told of the devastating side effects, well that isn’t right,” she said on her site.