Onglyza Excluded from Preferred Drug List over Side Effects 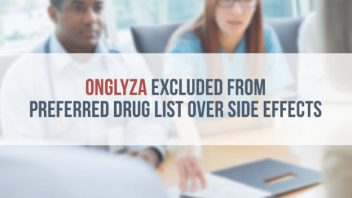 Express Scripts — one of the largest pharmacy benefit managers in the U.S. — excluded diabetes drugs Onglyza (saxagliptin) and Kombiglyze XR (saxagliptin and metformin extended release) from its 2017 formulary because of heart failure concerns.

The 2017 exclusion is carry-over from 2016, when Express Scripts initially removed Bristol-Myers Squibb and AstraZeneca’s Type 2 diabetes drugs from its 2016 Preferred Drug List Exclusions.

The company cited a 2016 U.S. Food and Drug Administration advisory committee ruling on the drug’s safety. The committee ruled the drug had an “acceptable cardiovascular risk,” but that its label should warn about a 27 percent higher risk of heart failure requiring hospitalization.

“Onglyza is associated with increased risk of hospitalization due to heart failure,” David Whitrap, senior director of corporate communications told MM&M. “The market leader, Januvia, showed no risk…With the availability of other DPP-4 inhibitors, the benefits of initiating therapy, particularly with Onglyza, over other agents is less compelling.”

AstraZeneca has not issued a statement about Express Scripts’ exclusion of Onglyza and Kombiglyze XR from its formulary.

The FDA approved Onglyza in 2009 and Kombiglyze XR in 2010. The drugs belong to a class of drugs call DPP-4 inhibitors. These drugs work by reducing the amount of sugar produced in the liver and helping the body produce more insulin after meals.

In 2013, FDA began investigating these drugs and others in its class for increased risk of pancreatitis and pre-cancerous findings of the pancreas. The agency told drug makers to add information about these findings on its label.

In 2015, it warned that DPP-4 drugs including Onglyza and Kombiglyze XR “may cause joint pain that can be severe and disabling. We have added a new Warning and Precaution about this risk to the labels of all medicines in this drug class, called dipeptidyl peptidase-4 (DPP-4) inhibitors.”

The heart failure risk warning came in 2016. Unlike previous warnings about pancreatitis and joint pain for all DPP-4s, the heart failure warning applies only to Onglyza and Nesina (alogliptin). According to the FDA the drugs “may increase the risk of heart failure, particularly in patients who already have heart or kidney disease.”

Added Benefit of Onglyza not Proven

Express Scripts did not find an added benefit to treatment with Onglyza over other DPP-4s, especially with the risk of heart failure. The German Institute for Quality and Efficiency in Health Care (IQWiG) reached the same conclusion in 2016.

In original phase 2 and 3 studies of saxagliptin, researchers found the drug reduced the risk of major cardiovascular events. Then, drugmakers designed the Saxagliptin Assessment of Vascular Outcomes Recorded in Patients with Diabetes Mellitus (SAVOR)–Thrombolysis in Myocardial Infarction (TIMI) 53 trial to further study the benefits of the drug.

But, IQWiG found SAVOR data did not prove Onglyza or Kombiglyze had any added benefit for reducing cardiovascular risk.

Now, some lawyers are in the early stages of filing lawsuits on behalf of patients who suffered heart failure from the two drugs.