Is Invokana Worth the Risks? 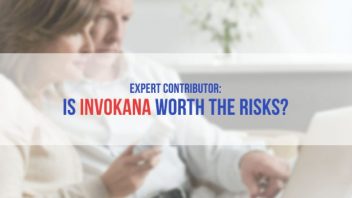 If people knew about the side effects of a drug, would they still take it? Here’s the thing. Consumers are the guinea pigs when being prescribed a new type of medication — especially when the FDA identified potentially significant risks prior to approving a drug.

That is the case with Invokana (canagliflozin) — a drug that belongs to a new class of Type 2 diabetes medications called SGLT-2 inhibitors.

The jury is completely out when it comes to the possible long-term risks associated with this class of medication.  But, the real clincher here is that in the majority of cases, patients can prevent, control, and in many cases reverse Type 2 diabetes without medication.

Invokana (canagliflozin) belongs to a new class of medications for treating Type 2 diabetes called SGLT-2 inhibitors. Unlike metformin — which helps improve sensitivity to the efforts of insulin to move excess glucose out of the blood stream into the cells of the body — SGLT-2 inhibitors curb the reabsorption of glucose back into the bloodstream through the kidneys.

Metformin is the classic, frontline medication prescribed for metabolic syndrome, prediabetes, and Type 2 diabetes. Doctors have prescribed metformin since the 1970s, and it has a solid safety record.

The FDA first approved Invokana (canagliflozin) — the first in the class of medications — in March 2013 with Farxiga (dapagliflozin) following soon after.  Currently, there are three SGLT-2 inhibiting drugs on the market, as well as four combination medications, most of them combined with metformin in one way, shape or another.

Three months prior to FDA approval of Invokana, concerns were raised by the agency regarding possible cardiovascular injury, kidney damage and bone health risk.

In spite of those concerns, the FDA approved Invokana with the mandate that Johnson & Johnson’s Janssen pharmaceuticals conduct five post-marketing studies to evaluate potential problems.

Type 2 diabetes is a serious condition that comes with several complications. So, it is important to seek treatment. But, with all of these possible medication risks, a patient might decide to try another medication or make some lifestyle changes instead.

Lifetsyle and Nutrition Factors That May Cause Diabetes

Type 1 diabetes occurs when the pancreas sustains damage that destroys the beta cells in the Islets of Langerhans, responsible for the production of insulin.  Without insulin, you will die due to ketoacidosis, a process that causes very rapid metabolism of fat cells for energy. Without insulin, the body cannot use glucose. Type 1 diabetes is a completely different disease than Type 2 diabetes and autoimmune attacks on the pancreas typically cause it.

Some of the possible reasons attributed to this process include an infection somewhere else in the body causing immune-system confusion, vaccination side effects and early consumption of cow’s milk.

When it comes to Type 2 diabetes, however, most people contribute to their risk with poor dietary choices, lack of exercise, and cumulative effects over time.  In most cases, people can prevent and control Type 2 diabetes with lifestyle changes. You may even be able to reverse the disease.

Vitamins, Foods and Supplements for Diabetes

Change your diet. Eat a whole-food diet based on whole foods, elimination of processed foods, grains, and simple sugars.  Plenty of veggies, moderate whole fruit, moderate good-quality protein, and plenty of healthy fats, such as real butter, animal lard, olive oil, coconut oil.  (Yes, I really do mean that!) That’s it.  Just do it.  This will starve your bloodstream of excess glucose, take a load off the work of the pancreas when it comes to insulin production, and lower all of that body fat that puts a strain on so many areas of health.

Get regular exercise. Weight training is best. Once the muscles burn off their liquid glucose supply, they are hungry for more, and this helps with insulin sensitivity.

Employ the use of some key foods, herbs and nutrients, such as chocolate (believe it or not!), cinnamon, Beta-glucans, chromium, Vitamin D, lipoic acid, Gymnema sylvestre and ginseng.

Remember, you should not stop your medication without consulting your doctor. Before you start any type of natural treatment, make sure these vitamins and herbs do not interact with your medication and keep a close eye on your blood glucose.