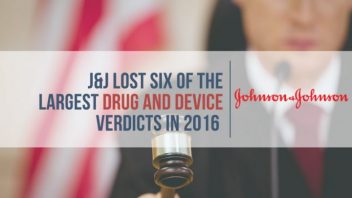 These six jury verdicts were the largest of 2016, and the seventh — $124 million — was against Audi for a back-seat failure.

In total, J&J faces more than 100,000 lawsuits in federal and state courts for a number of defective products, according to the company’s annual report.

In addition to 9,400 for Pinnacle hip implants, 3,100 for talcum powder and 18,500 for the antipsychotic Risperdal, J&J still has large groups of cases pending for its blockbuster blood thinner Xarelto (rivaroxaban) and pelvic mesh implants — 16,900 and 54,800, respectively.

Judge Joseph R. Goodwin — who is overseeing about 32,000 pelvic mesh cases against J&J in West Virginia federal court — previously urged the company to settle. So far, the company has not shown intention to do so.

It seems to have a similar approach for its other product liability suits.

“J&J’s tactics are tried and true for a company facing mass litigation: the longer and harder it fights, the better the chance of whittling down the claims or discouraging other plaintiffs,” Bloomberg wrote.

But, it has settled some claims in the past.

The first Xarelto bellwether trial is set to begin April 29 in the Eastern District of Louisiana before Judge Eldon E. Fallon.