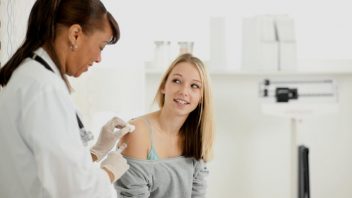 Six out of 10 U.S. teens ages 13 to 17 received one or more doses of the human papillomavirus (HPV) vaccine in 2016, according to the Centers for Disease Control and Prevention. The number of vaccinated teens is up four percentage points from the previous year in which 56 percent of teens got the cancer-preventing shots. The vaccine is also becoming more common among teenage boys.

HPV is a group of more than 150 related viruses — some of which can lead to cancer. Nearly one in four Americans is currently infected with HPV, with about 14 million people, including teens, contracting the virus each year. An estimated 31,500 newly diagnosed cancers are attributed to HPV annually.

HPV vaccination has led to dramatic declines in HPV infections, according to the CDC. Since the introduction of HPV vaccine in 2006, infections with HPV types that cause certain cancers and genital warts have decreased by 71 percent in teen girls and 61 percent in young women, the agency says.

Gardasil 9 is the only HPV vaccine currently available in the U.S. The HPV vaccine is intended to guard against the types of HPV that most commonly cause cancer. According to the CDC, 90 percent of the cancers caused by HPV could be prevented by the vaccine.

The CDC recommends 11 to 12 year olds get two doses of HPV vaccine at least six months apart. Teens older than 14 years and people aged 9 through 26 years with certain immunocompromising conditions should get three shots over six months, according to the CDC. Up until recently, a full series required three doses.

The annual National Immunization Survey-Teen (NIS-Teen) report shows how many U.S. teens get vaccinated each year. According to the report, 65 percent of teenage girls and 56 percent of teenage boys received one or more doses of the HPV vaccine in 2016.

The number of boys getting the HPV vaccine increased by six percentage points from 2015; the number of vaccinated girls remained about the same.

HPV vaccine rates were higher in heavily populated areas versus rural and less urban areas. HPV vaccination was more common among adolescents living below the federal poverty level than among those living at or above the poverty level.

From 2013 to 2016, the number of teenagers who received at least one dose of HPV vaccine increased an average of five percentage points per year nationally. New York City saw the greatest annual increase with 7.7 percentage points.