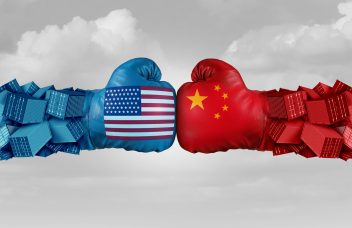 It’s not just soup cans and car parts that stand to be affected by President Trump’s proposed tariffs on Chinese goods. Prescription drugs and medical devices also are on the list of goods that may have 25 percent tariffs placed on them.

If the tariffs aren’t averted, they’re sure to push already-high drug and medical device prices to new levels.

As usual, bad things tend to flow down. And at the bottom of this particular pecking order are sick people. Medical patients are likely to pay the price if this possible trade war erupts into a new kind of drug war.

China is a major provider of prescription drug ingredients in the U.S.

The targets include ingredients for drugs, including insulin, as well as blood products and antidepressants.

The Association for Accessible Medicines, which represents generic and biosimilar drug manufacturers, issued a statement suggesting the proposed tariff list of pharmaceutical ingredients and products might have an effect on costs: “We are concerned that the proposed tariffs may lead to increased costs of manufacturing for generics and biosimilars and thus higher prescription drug prices for patients in the U.S.”

“For an administration that wants to lower drug prices, this would do the exact opposite,” said Ben Wakana, executive director of Patients For Affordable Drugs, in a statement to Drugwatch. “We are eager to read the comprehensive set of recommendations the administration promised to release in the next few weeks, but the tariffs announced (recently) would be a step in the wrong direction. It’s a tax that would raise prices on prescription drugs.”

Tariffs could also affect pacemakers, artificial joints, defibrillators and birth control pills, according to the New York Times.  Medtronic and Zimmer Biomet have orthopedic device factories in China, which export to the U.S. One estimate says that if the proposed 25 percent tariff takes effect, the medical device industry could lose up to $1.5 billion annually.

Those costs would likely be passed on to consumers.

From about 2001 to 2016, most of China’s medical device exports were low tech, according to a recent report in the U.S. International Trade Commission Journal of International Commerce and Economics. But that has shifted toward more medium and high-tech devices.

The report credits two factors for this change: China’s vast and expanding health care market and government policies that have emphasized production of innovative devices by local companies.

Orthopedic implantable devices comprised one of the fastest-growing Chinese exports, according to the report, increasing by 189 percent between 2011 to 2016. Also, diagnostic equipment exports, including MRIs and electrocardiographs, grew 37 percent.

The report also says these Chinese products tend to be less expensive than those made elsewhere. “Chinese-produced devices can retail at anywhere from 10 to 70 percent of the price of multinational firms, depending on the product,” the report states.