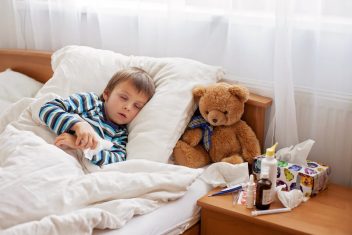 After a record 80,000 flu-related deaths last season, the U.S. faces the possibility of another intense influenza spell this fall and winter because of low-performing flu shots, disease mutations and below-par vaccination rates, especially among kids.

The 2018-19 flu season, which began this month, could be as bad or worse as last year’s, health officials say while urging people to take preventative measures, mainly getting the latest flu shot.

The flu season’s peak is typically between December and February, according to the Centers for Disease Control and Prevention.

An estimated 900,000 hospitalizations and more than 80,000 deaths were recently linked to last year’s flu season.

The flu’s death toll — the highest in 40 years — included 180 children. Most were not vaccinated, Adams said.

Vaccination rates among children remain below a national public-health goal of 80 percent. Last year’s rate dropped by 1.1 percent to 57.9 percent, according to the National Foundation for Infectious Diseases.

Health experts are also reporting a wide range of vaccination coverage among children in the U.S. Rhode Island is the highest at 76.2 percent.  Wyoming comes in last at 43.2 percent.

The CDC estimates last year’s flu shot was effective only 36 percent of the time.

Researchers at the University of Texas Medical Branch in Galveston, Texas, are predicting that the vaccine may fall very short for a second year in a row.

The World Health Organization and the U.S. Food and Drug Administration selected the viruses — including the H3N2 virus — for the 2018-19 flu vaccine in March.

But flu viruses are constantly changing, says the CDC. So, new viruses — or even mutated viruses — can appear at any time. Selecting the wrong viruses to include in the flu vaccine can interfere with its effectiveness — or its ability to protect against the flu.

Dr. Slobodan Paessler, a pathology researcher at UTMB Galveston, raised concerns about mutations in a recent article in Houstonia Magazine.

Paessler said that due to some “significant genetic differences” in the H3N2 virus that circulated in Australia – and is expected to sweep over America during the 2018-19 flu season – the vaccine may not be effective in keeping people from contracting the flu.

Australia’s flu season runs opposite that of the U.S., so it is often used as guidance in WHO’s recommendation of viruses to be included in the flu shot each year in America.

Paessler’s predictions have been right the past three flu seasons, Houstonia said.

The CDC maintains the flu vaccine is the best bet against the serious illness. People can use a government website — vaccinefinder.org — to find a nearby vaccine provider.

The CDC says getting vaccinated by the end of October is ideal. But getting the shot after that can still help protect the recipient and others from contracting or spreading the illness.