Statins May Be Beneficial Beyond Cholesterol Control, But Not Without Risks 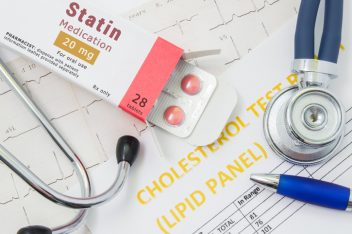 Statins prescribed to lower cholesterol may also be beneficial for reducing the risk of a number of other health problems, doctors say.

Statins, sold under such brand names as Crestor, Lipitor, Mevacor and Zocor, are usually prescribed to people with high cholesterol to prevent heart disease. As many as 30 million Americans take statins, and statistics show that they are effective in lowering cholesterol.

Statin use is on the rise in the United States. According to the latest revised cholesterol guidelines, 27 million more Americans should be on statins to prevent heart disease.

However, these drugs remain controversial, and there are still doctors on both sides of the issue.

Statins may also reduce inflammation in the body, and some doctors feel that the drugs may also treat diseases caused by inflammation. Phillips said, “”Inflammation is linked to a number of other diseases: Alzheimer’s disease, a number of forms of cancer, strokes. So by lowering that, we could theoretically lower many of these diseases.”

But there are definitely risks, and other doctors are not as eager to jump on the statin bandwagon.

The most publicized side effect of statins like Lipitor is the risk of developing diabetes, a disease already on the rise in the United States.

One of the critics of statins is Dr. Mark Hyman, a practicing physician and best-selling author. In a Huffington Post article, Hyman wrote: “If all doctors followed the latest cholesterol treatment guidelines and all their patients took their prescribed statin medication, there would be 3.5 million more diabetics in America.”

For post-menopausal women, the risk of diabetes is 71 percent higher, according to a study published in the Archives of Internal Medicine. Asian women are at the top of the scale, with a whopping 78 percent increased risk.

He adds that statins may be “an acceptable risk if there were no other treatment for heart disease.”

The risks of statins include:

Some people injured by Lipitor chose to file lawsuits, and the claims are currently pending in the U.S. District Court for the District of South Carolina.

Even the FDA finds the evidence of side effects concerning enough to update side effect information to the drugs’ package inserts.

In 2011, the U.S. Food and Drug Administration (FDA) expanded its advice on statin risks and revised drug safety inserts to reflect its concerns.

The FDA advised patients and doctors that it had received reports of liver injury, memory loss, increased blood sugars that may lead to diabetes, and muscle damage.

On the FDA’s website, the agency’s deputy director for safety in the Division of Metabolism and Endocrinology Products, Amy G. Egan, said, “Their benefit is indisputable, but they need to be taken with care and knowledge of their side effects.”