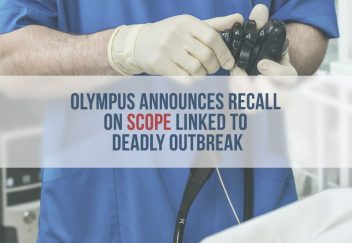 This past Friday Olympus Corp. announced that it would recall a controversial medical scope linked to deadly superbug infections and give the device a design overhaul, according to an FDA statement.

The scope in question, the TJF-Q180V duodenoscope, is used about 700,000 procedures each year, including those to treat pancreas problems, stomach disorders and cancer. The scope is mounted on a flexible tube and inserted through the mouth or anus. Olympus manufactures about 85 percent of all scopes used in the U.S.

The recall and redesign came in response to a Senate committee report released on January 13, 2015 showing the company knew about the faulty design of its scopes since 2012. However, the device maker did not disclose the problems with the device until February 2015 when an outbreak of the deadly carbapenem-resistant Enterobacteriaceae (CRE) bacteria at UCLA Medical Center killed two patients and potentially infected about 200 others.

“We have made it a top priority to improve the safety of duodenoscopes and help protect patients from bacterial infections associated with these medical devices,” said William Maisel, M.D., M.P.H., deputy director for science and chief scientist in the FDA’s Center for Devices and Radiological Health. “The Olympus TJF-Q180V’s new design, as well as the new annual inspection program, is intended to reduce the risk of fluid leakage into the elevator channel, which in turn can reduce patient exposure to bacteria and other potential infections.”

This is not the first time Olympus redesigned the scope. The previous design change occurred in 2010 and was supposed to make the devices more effective and safer. Olympus previously blamed hospitals for the infections.

The device maker will begin collecting scopes from hospitals in February.

The recall came too late for a number of patients. A number of people infected by the scope filed lawsuits against Olympus, claiming the company hid the health risks and manufactured a faulty device.

“It infuriates me to know they knew about this in 2012,” Steven Wilkinson-St. George told the Los Angeles Times. He fell seriously ill from CRE after a scope procedure at UCLA’s Ronald Reagan Medical Center in December 2014. “This should have been done years ago,” he added.

Wilkinson-St. George, who filed a lawsuit against the company, dropped from 170 to 110 pounds and spent a month in the hospital on strong antibiotics as a result of the infection.

Others were not so lucky and did not survive treatment. CRE, the superbug bacteria responsible for a number of the scope-linked infections, normally kills about half of the people it infects because it is difficult to treat.

According to the Senate’s report, Olympus and other scope manufacturers “failed at every level to meet basic expectations of transparency and openness and to actively engage with FDA to address contamination issues.”

The FDA was also a target of federal investigation after it took four years to realize the scope hit the market in 2010 and was never cleared.

“Why didn’t we notice it? I don’t know,” Karen Riley, deputy director of strategy for the FDA’s Office of External Affairs told CNN.

According to the FDA, Olympus should be able to correct the design flaw by August 2016 in about 4,400 devices currently in use. In the meantime, the agency says hospitals can use the scopes but should follow the cleaning instructions set by the company.