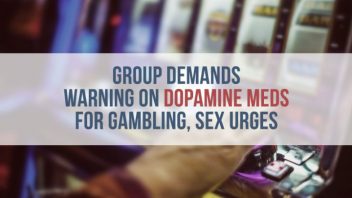 The non-profit watchdog group, Public Citizen, called for the U.S. Food and Drug Administration to add black box warnings to dopamine agonists that may cause compulsive behaviors like gambling, sexual obsessions and shopping.

The group sent its petition to the FDA’s Commissioner, Robert Califf, at the end of June. The drugs in question include GlaxoSmithKline’s Requip, Boehringer Ingelheim’s Mirapex and UCB’s Neupro in addition to three other drugs. These dopamine agonists typically treat Parkinson’s disease and restless leg syndrome.

But a growing number of studies — more than 80 cited by Public Citizen — link them to compulsive behaviors. Scientists suspect that these compulsive behaviors are caused by the way these drugs manipulate and affect levels of the neurotransmitter dopamine in the brain. The interact with a key receptor called D3.

According to studies cited by Public Citizen, 17 percent of people who use these drugs suffer from compulsive behaviors versus only about 1.6 percent of the general population.

“As studies have shown, as many as one in five patients taking a dopamine agonist drug may develop certain impulse-control problems and compulsive behaviors,” Public Citizen said in a press release. “In their more severe cases, impulse-control problems and compulsive behaviors can have devastating, life-altering effects. Divorces, financial ruin, criminal charges and suicide attempts have been reported in patients using these drugs.”

The FDA said it would review the petition.

These drugs spawned lawsuits related to massive gambling debts and other financial damages incurred by people who say the drugs caused them to compulsively gamble.

In 2010 a jury awarded $8.3 million dollars to Gary Charbonneau who sued the maker of Mirapex, Boehringer Ingelheim. He said he lost $260,000 over the course of several years because of compulsive gambling caused by the drug.

GlaxoSmithKline defended its drug, Requip, disputing the assertions by the watchdog group.

“[GSK] does not agree with the conclusions Public Citizen draws from the studies it has cited. The FDA-approved label, which is based on a review of the available data for Requip, clearly outlines the safety profile of the medicine which is very well known in the prescriber community.”

Studies have also shown that patients taking Abilify, a partial dopamine agonist, may be at higher risk for compulsive behaviors. Public Citizen’s petition did not focus on the drug, but the petition acknowledged data showing it was related to these side effects. Abilify also affects the D3 dopamine receptor.

Doctors wrote about 1.5 million prescriptions for the drug in 2015, and it made $6.4 billion in 2013. In May 2016, the FDA released a safety warning that Abilify, Abilify Maintena and Aristata can cause uncontrollable urges to gamble, have sex, binge eat and shop.

Like the Mirapex litigation, attorneys filed lawsuits on behalf of people who say Abilify caused them to lose substantial amounts of money because of compulsive gambling and other behaviors.