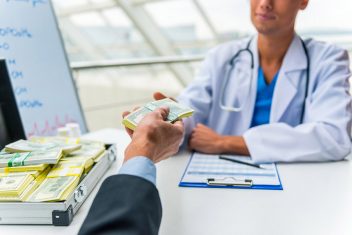 Pharmaceutical companies promoting prescription opioids made more than $46 million in payments to doctors across the United States in a 29-month period, according to a new study published in the American Journal of Public health.

Nearly half of the payments were made to promote fentanyl, a synthetic opioid that is 50 to 100 times more potent than morphine.

“National data implicate fentanyl in a rapidly increasing number of overdose deaths, although most are due to illicitly manufactured fentanyl,” the authors wrote. “Further studies should clarify the extent to which industry payments contribute to prescribing patterns and overdose rates across geographic regions.”

About one in 12 doctors — including one in five family practice physicians — in the U.S. received a payment from a drug manufacturer connected to opioids in the study period. The total dollar value of payments went up by nearly 11 percent in 2015, compared to the previous year.

More than 90 Americans die each day after overdosing on opioids, according to the National Institute on Drug Abuse, which calls the misuse and addiction to opioids “a serious national health crisis.”

The Centers for Disease Control and Prevention says the drug overdose death rate increased from 12.3 per 100,000 people in 2010 to 16.3 in 2015. The death rate increases were seen in 30 states and the District of Columbia. The CDC found that the increase was most likely driven by illicitly manufactured fentanyl and heroin.

A review published last year in the New England Journal of Medicine said that a “key underlying characteristic of the epidemic is the association between the increasing rate of opioid prescribing and increasing opioid-related morbidity and mortality.”

While evidence suggests the crisis may be leveling off, the 2016 review suggested a small number of people unable to obtain prescription opioids may be turning to pharmacologically similar heroin to take their place.

The researchers from Boston University School of Medicine and Brown University School of Public Health mined data from the Open Payment Program database from the government’s Centers for Medicare and Medicaid Services to find non-research-related payments made to physicians involving opioids between August 2013, when the database was created, and December 2015.

According to the new study, the five opioids involved in the most payments from drug companies to doctors were:

They found that in that period, there were more than 375,000 payments made to 68,177 physicians, with the top 1 percent receiving 82.5 percent of the total dollars paid.

Drug formulations created to deter abuse were involved in 20.3 percent of total payments, and buprenorphine, which is marketed to treat addiction, comprised 9.9 percent.

Most of the payments, 63.9 percent, were for speaking fees or honoraria. Nearly 94 percent of the time, the payments were made in the form of food and beverages.

The median paid per physician was just $15, although the top 1 percent of physicians received more than $2,600 a year. And the study authors noted that previous research has found that even small gifts given to doctors by pharmaceutical companies make the health care providers much more likely to prescribe the particular drug being promoted.

Physicians who were given free meals were as much as three times as likely to prescribe the company’s brand of drug, according to a 2016 study by researchers at the University of California.

In 2016, pharmaceutical and medical device companies paid a total of $8.18 billion to doctors and teaching hospitals, which was a 1.1 percent increase over 2015, according to information from the Open Payments Program, where patients can use the database to look up their own doctors.

“FDA-approved abuse-deterrent formulations, which have properties expected to render misuse less likely, comprised only one-fifth of total payments, suggesting that 150 such medications may not be as heavily marketed as other opioids,” the research report says. “Additionally, despite CDC recommendations to consider use of non-opioid medications for pain, NSAIDs (non-steroidal, anti-inflammatory drugs), a prominent family of non-opioid pain medications, were not as heavily marketed as opioids.”

In the meantime, another study by two Princeton University economists found that doctors who graduated from higher quality medical schools are less likely to prescribe opioids. Strikingly, doctors who attended the lowest-ranking schools wrote three times more opioid prescriptions than physicians who were trained at the top-rated medical school, Harvard.

“Taken together,” the economists wrote, “our findings suggest that a doctor’s initial training has a large impact on their attitudes towards opioid prescribing, especially for GPs (general practitioners). Since variations in opioid prescribing have contributed to deaths due to the current opioid epidemic, training aimed at reducing prescribing rates among the most liberal prescribers—who disproportionately come from the lowest ranked medical schools—could possibly have large public health benefits.”

And yet another study in the New England Journal of Medicine in February found that patients of emergency room doctors who tend to prescribe more opioids are significantly more likely to be addicted to the drugs a year later than patients who are treated by doctors who tend to prescribe fewer opioids. “These results,” the study says, “suggest that an increased likelihood of receiving an opioid for even one encounter could drive clinically significant future long-term opioid use and potentially increased adverse outcomes among the elderly.”