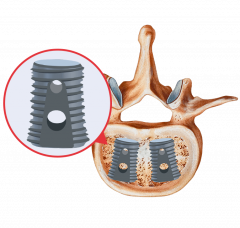 Since 2008, more than 10,000 people have sued Medtronic over serious complications they claim resulted from the company’s Infuse bone graft. The company spent most of a decade settling 4,000 of the lawsuits, often in individual and confidential agreements. In June 2017, the company reported it had set aside $300 million to resolve virtually all pending and planned Infuse lawsuits against Medtronic, which could mean an end to lawsuits injured patients could file.

People who sued Medtronic claimed the company pushed doctors to use its Infuse Bone Graft for treatments for which it had not been approved, known as “off-label” use.

About 10,000 patient lawsuits claimed Medtronic marketed Infuse for off-label uses that contributed to patient injuries, and in some cases, death.

Medtronic has settled 4,000 of the lawsuits and reportedly planned to settle almost all of the pending 6,000 lawsuits.

The latest settlement was expected to put an end to all remaining and future Infuse bone graft lawsuits against Medtronic.

Financial documents filed with the federal government in June 2017 reported Medtronic planned to settle “substantially all” of the remaining 6,000 or so lawsuits over its Infuse device.

The company told the Securities and Exchange Commission it had put aside $300 million to cover “certain litigation charges.”

The settlement was likely to resolve pending Infuse lawsuits against Medtronic as well as end plans for any future widespread Infuse litigation over the same allegations.

Medtronic had resolved more than 4,000 other Infuse lawsuits through earlier settlements. These included a $22 million settlement with 950 Infuse patients in 2014. Medtronic settled others for undisclosed amounts.

In addition, the company paid $85 million to settle a shareholders lawsuit in 2012 for failing to reveal most Infuse sales were for off-label uses. In July 2018, Medtronic agreed to pay $43 million to settle another stockholder lawsuit. This one claimed the company inflated stock prices. The lawsuit called it “a scheme and course of conduct to defraud the investing public.”

The U.S. Department of Justice also investigated Medtronic. The investigation ended in a $40 million payout to settle allegations of illegal kickbacks to doctors as incentive to use Medtronic’s Infuse product.

Fact
Medtronic has paid more than $460 million to settle lawsuits over its Infuse Bone Graft.

A 2008 lawsuit filed in California claimed that the off-label use of Infuse for a neck surgery is what killed a 74-year-old woman.

Other patients have filed thousands more lawsuits claiming the device has caused complications ranging from unwanted bone growth to cancer.

People filing lawsuits blamed off-label use for their injuries in 85 percent of the cases.

Lawsuits named Medtronic, the hospitals where their spinal surgeries were performed and/or the surgeons who performed their procedures.

In December 2016, a Missouri court set a trial date for an Infuse lawsuit filed by Trisha Keim, effectively backing Medtronic into a corner. Within seven months, the company reported it had set aside $300 million to settle “substantially all” of the 6,000 lawsuits it still faced. Keim’s case never went to trial.

Until the court set a case for trial, Medtronic had been able to have the courts keep thousands of pages of internal company documents sealed. A jury trial would have made the documents public and available for thousands of other plaintiffs to use in their lawsuits against Medtronic.

Medtronic had previously argued that the “preemption doctrine” shielded Infuse from lawsuits. The argument was that FDA approval meant the device was protected for all lawsuits, including those over off-label uses.

But Keim’s lawyers argued that the Infuse device used in her surgery “departed from its intended design, including that the parts were sold separately rather than together.”

Attorneys also pointed out that one of the components had never gained FDA approval. The Infuse device used in Keim’s surgery also didn’t include all of its intended parts.

Product liability expert David Prince of Mitchell Hamline School of Law said in a news report that the ruling was “a very big deal” for the thousands of plaintiffs who had been waiting on the sidelines.

In ruling that the pre-exemption doctrine did not apply in Keim’s case, the court opened the floodgates for thousands of other Infuse lawsuits to move forward.

Earlier, in 2014, Medtronic paid a total of $22 million to settle about 950 claims from plaintiffs allegedly injured after Infuse was used in their spinal surgeries. The settled lawsuits accused the company of manipulating studies and engaging in misleading marketing tactics.

The company said the settlement was rendered to “disputed claims” and confirmed that the compromise was in no way an admission of liability. Medtronic said it stood by its product, which has been used in more than 1 million patients since FDA approval in 2002.

The company projected spending $120 million to $140 million on settlements — including the $22 million one — in the fourth quarter that year.

In December 2017, Medtronic agreed to pay five states $12 million to resolve a deceptive advertising lawsuit claiming the company misled doctors and the public about its Infuse bone grafts.

State attorneys general had argued Medtronic worked in secret to manipulate research articles on Infuse. They claimed the company then used those articles appearing in medical journals to market the device and increase sales.

“By using these misleading claims, the company created a higher demand for Infuse,” Oregon Attorney General Ellen Rosenblum said in a statement. “It is unacceptable for a company to use company-sponsored literature with misleading data to try to show that its product is more effective than other therapies.”

In 2012, the U.S. Senate Finance Committee found Medtronic had been “heavily involved” in research and writing behind published studies of Infuse. The committee also determined the company had paid the doctors who authored the studies $210 million.

The lawsuit had claimed Medtronic

In agreeing to the settlement, Medtronic denied any wrongdoing. But the company will have to follow new requirements on how it uses information from research in promotional and marketing efforts.

The state governments of California, Illinois, Massachusetts, Oregon and Washington state each shared in the settlement.

Two patients who received Infuse bone grafts at the University of California Los Angeles (UCLA) later sued the teaching hospital, surgeon Jeffrey Wang and Medtronic for alleged injuries resulting from the off-label use of the product.

The plaintiffs, Ralph Weiss and Jerome Lew, alleged that in both surgeries Medtronic’s Infuse product was used in ways not approved by the FDA.

Settlement Fact
UCLA settled with Weiss and Lew for a combined $8.45 million.

The patients further alleged that Wang failed to inform them of a financial relationship between the surgeon and the product manufacturer. The lawsuits claimed that Wang received hundreds of thousands of dollars in grants and royalties from Medtronic.

UCLA said it only settled so the school and its medical program could “move forward,” but it did not respond to any of the allegations made by the plaintiffs.

Medtronic paid $40 million to the U.S. Department of Justice to settle charges that it had violated the Anti-Kickback Statute.

The statute is a part of the federal False Claims Act and was designed to ensure a physician’s independent medical judgment in making decisions affecting a patient’s health, free from enticement by companies such as Medtronic.

The government alleged that between 1998 and 2003 Medtronic paid kickbacks to physicians in various forms, including sham consulting agreements, royalties and lavish trips.

Medtronic’s shareholders brought their own lawsuit against the company, alleging it made misleading statements regarding Infuse. Although the manufacturer denied any wrongdoing, it agreed to settle for $85 million in 2012.

The settlement resolves, among other claims, Medtronic’s failure to disclose how much of its success of Infuse was dependent upon it being used in off-label manners. Shareholders further alleged that Medtronic’s Infuse sales, as well as its shares, fell after the company’s disclosure of the Justice Department investigation.

In December 2016, the Eighth U.S. Circuit of Appeals revived a second shareholder lawsuit following a lower court’s ruling that the plaintiff shareholders filed their suit too late.

The appeals court’s decision said that shareholders would not have been aware of potential problems concerning Medtronic’s Infuse studies until the 2011 publication of an article in The Spine Journal that called Medtronic’s alleged fraudulent actions into question.