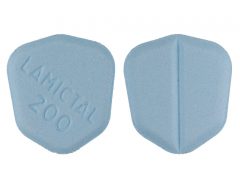 Lamictal (lamotrigine) is an anti-seizure medicine approved to treat epilepsy in children and adults and to delay mood episodes in people with bipolar I disorder. The most common side effects include dizziness, headache, vomiting and rash. The drug has a black box warning for life-threatening skin rashes.

GlaxoSmithKline developed Lamictal, and the U.S. Food and Drug Administration approved it in 1994.

Even though it’s only approved for epilepsy and as maintenance medicine to delay mood episodes in people with bipolar I, some medical providers prescribe it to treat other conditions off-label — uses not approved by the FDA.

Lamictal XR, the extended-release version of Lamictal, is not approved for patients younger than 13. It’s only approved for treating certain types of seizures.

In January 2020, Taro Pharmaceuticals, a manufacturer of generic Lamictal, issued a recall for one lot of lamotrigine because it was contaminated with a small amount of enalapril maleate — a blood pressure and heart failure drug that may cause birth defects.

Researchers believe Lamictal works by slowing down electrical signals and inhibiting certain chemicals in the brain that cause brain cells to signal too quickly. When brain cells work too fast, it causes seizures. By slowing down these brain signals, lamotrigine may help to reduce seizure episodes.

In people with bipolar disorder, the medication helps to reduce mood swings, though researchers aren’t sure how the drug actually works.

Lamictal comes in several forms and strengths. Depending on the reason for treatment, the recommended dosage is different.

Patients typically take Lamictal once or twice a day, and it can be taken with or without food. If taking Lamictal XR, make sure to take the pills whole and don’t crush, cut or chew them.

The medication starts at a low dose. Then, the dose gets higher over the course of several weeks. People who are taking the drug with other drugs for seizures take lower doses. They may take it every other day when beginning treatment.

Common side effects of Lamictal (lamotrigine) include:

The most common side effects in children were infection, vomiting, diarrhea, accidental injury, fever, abdominal pain and tremor.

In clinical trials, the most common side effects that caused people to drop out of the trial included: rash, headache, dizziness and impaired balance or coordination.

There have been reports of serious side effects linked to Lamictal, but these side effects are rare, according to the drug’s label. These range from serious skin rashes to death.

In clinical trials, 11 of 3,348 adults with epilepsy who received Lamictal had a serious rash that led to hospitalization and discontinuation. Researchers received postmarketing reports of rash-related deaths, but the numbers were too few to estimate the exact rate.

HLH is a potentially life-threatening syndrome caused by overactivation of the immune system. The overactivation causes severe inflammation throughout the body. In April 2018, the FDA released a warning that Lamictal can cause HLH.

Multiorgan hypersensitivity reactions, also known as drug reaction with eosinophilia and systemic symptoms (DRESS), have occurred. This is a potentially fatal drug reaction.

Symptoms include fever, rash, and other organ problems. It sometimes resembles a viral infection. Report these symptoms to your medical provider right away.

Taking Lamictal increases the risk of aseptic meningitis — inflammation of the membrane covering the spinal cord and brain. Symptoms include rash, fever, vomiting, nausea and stiffness and soreness in the neck. Symptoms usually appear anywhere from one day to about a month after starting therapy.

Patients taking Lamictal should not abruptly stop treatment. Patients with epilepsy may experience an increase in seizure frequency and people with bipolar disorder may develop seizures. Slowly weaning off the drug for at least two weeks is recommended.

Lamictal’s drug label lists several drugs that may increase or decrease the drug’s blood concentration. This could lead to less effective medication or an increase in side effects if the concentration is too high.

This is not a complete list of potential drug interactions. Make sure you tell your medical provider about all medications, supplements and herbs you take.

Drugs that interact with Lamictal include:

Make sure you talk to your medical provider about any allergies you have, medications you take or preexisting health conditions. Lamictal might not be safe or effective for everyone.