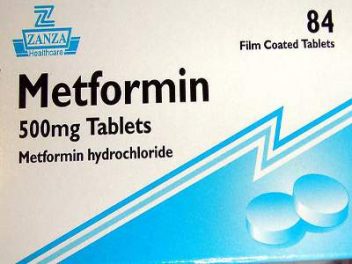 A popular diabetes medication appears to have significant benefits beyond simply treating the disease. Patients taking metformin — which is sold under brand names Glucophage and Fortamet — have a lower risk of heart attacks, strokes and even death than those on sulfonylureas, an extensive study has found.

Researchers analyzed data from hundreds of thousands of veterans with type 2 diabetes to compare the two types of widely prescribed drugs. Metformin users “faced a ‘modest but clinically important’ 21 percent lower risk of hospitalization because of cardiovascular complications than users of sulfonylureas (glyburide and glipizide),” according to U.S. News and World Report.

However, the scientists raised questions about some of the variables in the study, which was published in the Nov. 6 issue of the journal Annals of Internal Medicine. Although they concluded that metformin should be the preferred treatment for type 2 diabetes, the researchers couldn’t determine if metformin protects against heart trouble or if sulfonylureas increase heart disease. Furthermore, 97 percent of the study participants were male and 75 percent were white, so it’s unclear if the findings would apply to women or other racial groups.

Lead author of the study, Dr. Christianne Roumie of the Geriatric Research Education Clinical Center at the Nashville Veterans Affairs Medical Center in Tennessee, and her team tracked 250,000 veterans ages 18 and older who started one of the drugs between 2001 and 2008.

In an editorial in the same journal, Dr. Steven Nissen, chairman of the department of cardiovascular medicine at the Cleveland Clinic in Ohio, explains the significance of the study, saying that at least two-thirds of diabetes patients will die of heart disease.

“While the signals pointing to this situation have probably been there for several decades the [U.S. Food and Drug Administration] did not require testing for cardiovascular outcomes when looking at diabetes drugs until very recently,” he said. “Which means the industry has developed drugs solely based on their ability to lower blood sugar.”

That may very well be true of Takeda Pharmaceuticals‘ diabetes drug Actos, which came on the market in 1999. As a member of the thiazolidinedione (TZD) class of drugs, Actos (pioglitazone) has been linked to heart problems from the start. In fact, in clinical trials — before the drug was made available to the public — Actos use was found to have a definitive association with heart failure.

It wasn’t until 2007 that the FDA required Actos’ packaging to carry a black-box warning — the agency’s most stringent — about the increased risk of congestive heart failure. The agency also has warned U.S. consumers that its long-term study indicates that patients who take Actos for more than 12 months have a 40 percent increased risk of bladder cancer.