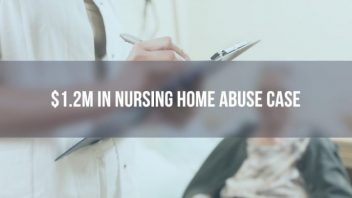 An Oklahoma jury awarded $1.2 million to the family of a 96-year-old woman who was abused in a nursing home by two employees.

Daughter Doris Racher and her two sisters installed cameras in their mother’s room after they suspected someone at the home was stealing from her. Mayberry passed away in July 2012, a few months after the video was released.

The video shows nursing home employees Lucy Waithira Gakunga and Caroline Kaseke forcing Mayberry to lie down by pushing her head and preventing her from breathing. Gakunga also shoved latex gloves into the grandmother’s mouth as Kaseke watched, the Daily Mail reported.

The two employees were fired, and they face criminal charges. The jury found the nursing home guilty of negligence and abuse.

“All in the memory of our mother. All of us fought hard and are just happy that now we can relax a little bit, and mother’s probably smiling,” Racher told the paper. “I’m so grateful for the outcome, because we told the truth and the truth always prevails.”

Attorneys for Quail Creek said the jury’s award was excessive. The facility plans to appeal the verdict.

Oklahoma’s nursing homes rank third-worst in the country last year, according to data gathered by the nonprofit group Families for Better Care. The year before, the state ranked fourth.

“When a facility is understaffed, you don’t have people paying attention and who are getting people up and mobile or turning them so they don’t develop bedsores — or making sure that they are getting the medical attention that they need,” elder care expert Elaine Sanchez told Drugwatch.

While many families rely on nursing homes and assisted living facilities to care for elderly parents, abuse and neglect is a reality in many facilities. Statistics estimate 1 in 3 residents faces abuse, and many homes under-report the number of incidents that occur.

Feds Toughen Up on Nursing Homes

Last week, the federal government announced it will make it harder for nursing homes to earn top grades. Officials intend to scrutinize use of anti-psychotic drugs and bolster a number of quality measures.

The government website, Nursing Home Compare, grades facilities on a on to five-star rating system. The site, launched in 2008, rates more than 15,000 nursing homes on government inspections, staffing levels and quality measures.

Ideally, the site would allow the public to choose the best home for their needs. But, critics say the site relies too heavily on self-reported data from facilities and even those with top grades still face violations and fines. The feds will look into quality benchmarks like how many residents fall in facilities, how many are on anti-psychotic medications and how many suffer from bedsores, but will still rely on self-reported statistics for these quality measures.

Advocates praise the change, while industry lobbyists are less excited about the changes.

“If centers across the country start losing star ratings overnight, it sends a signal to families and residents that quality is on the decline,” said Mark Parkinson told Kaiser Health News. Parkinson is president and CEO of the American Health Care Association, the industry lobby.

The new scores are expected soon.