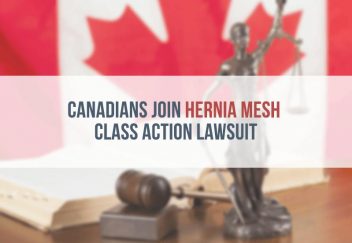 The device at the center of the claims is Ethicon’s Physiomesh Hernia Mesh which Health Canada recalled in 2016. The Canadian agency’s action came after it learned that recurrence and reoperation rates with the device were higher than those of other meshes.

After the recall, Canadians who received Physiomesh suffered severe pain and had to undergo additional surgeries to repair hernias that reoccurred.

Did you suffer complications after a hernia mesh surgery? Get a Free Case Review

Canadian lawyer Jill McCartney is representing plaintiffs in the class action. She told CTV News that plaintiffs had their hernias “come back with greater severity.”

“It is our understanding that there are more people out there, and there’s probably more people that are experiencing these kinds of side effects,” McCartney said.

Hernia mesh recipients wonder how the product was approved for use in the first place.

“I think there should be more testing on these products and not so quick to get them onto the market if they’re not ready,” Colleen Copland, one of the plaintiffs awaiting a second hernia surgery, told CTV News.

Ethicon said it would defend against the lawsuits. The company voluntarily pulled Physiomesh from the U.S. market in May 2016 but called it a withdrawal and not a recall.

In addition to Physiomesh, other brands are also the subject of lawsuits in state and federal courts. Manufacturers include Ethicon, C.R. Bard, Atrium and others.

“The injuries these plaintiffs have suffered are horrific. I certainly plan to honor the court and the victims of this product by working hard and doing everything in my power to see that justice prevails,” Matthews said in a statement.

According to Atrium’s marketing, the fish oil coating on C-QUR mesh is supposed to prevent it from adhering to the bowel. But, plaintiffs in the MDL allege Atrium’s mesh sticks to the bowel and other organs causing ulcers, infections, bowel obstructions and other complications.

C.R. Bard was one of the first companies to recall its hernia mesh implant — the Kugel Composix Hernia Patch. Following the recall, the company faced thousands of lawsuits. In the second bellwether trial, the jury found Kugel Patch was defective and awarded $1.5 million to the plaintiff Christopher Thorpe in 2010.

The following year, the company settled more than 2,600 lawsuits for $184 million.

While Ethicon has not discussed settlement for any of its U.S. Physiomesh cases, one of the first Physiomesh lawsuits filed by Matthew Huff heads to trial in January 2018.