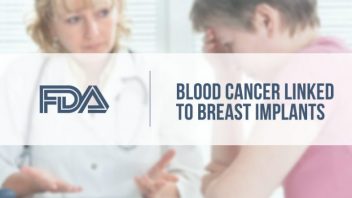 The Food and Drug Administration has recorded nine deaths in 359 cases of patients who developed blood cancer associated with breast implants in the last six years, according to a safety alert update issued by the agency in March.  The cases involve both reconstructive and cosmetic surgery.

The FDA says the cancer is not considered breast cancer. Rather, it is a type of non-Hodgkin’s lymphoma, a cancer of the cells of the immune system. It is found in fluid that accumulated around implants.

Breast implant-associated anaplastic large cell lymphoma (BIA-ALCL) is described as rare and usually – but not solely – associated with the use of textured breast implants. It is generally considered easily treatable.

In 2016, more than 290,000 people had breast implants, according to the American Society of Plastic Surgeons.

A recent study by researchers in Australia, where three have died from the cancer, concluded that women with textured implants are up to 14 times as likely to develop implant-associated cancer as women with smooth implants.

Study author Anand Deva, an academic and plastic surgeon, told the New Castle Herald that he thinks the reason the textured implants had a higher risk was because their surface is favorable to bacteria. “The textured implants,” he said. “present bacteria with the most ideal forest or surface area to grow to huge numbers if left unchecked.”

Deva said there’s evidence that fighting bacteria and reducing risk of contamination of textured implants could almost eliminate the risk of BIA-ALCL.

The surfaces of the textured implants are designed to allow tissue to grow around the spaces of the implant surface, according to one expert who spoke to NPR. Dhivya Srinivasa, a plastic surgery resident at the University of Michigan who led a recent review of worldwide data on BIA-ALCL, told NPR that the texturing can help prevent a surgical complication where scar tissue around the implant can become hard and painful.

According to the New York Times, researchers estimate one in 30,000 women with textured implants will develop the BIA-ACL in the U.S. and Europe. For unknown reasons, the risk is higher in Australia, one in 10,000 to one in 1,000.

One recent U.S. study put the lifetime risk of BAI-ALCL at 33 per 1 million people with textured breast implants, which the authors described as a statistically significant association between the textured implants and the disease. “Although women with a textured breast implant have a low risk of developing breast implant-associated ALCL, the current U.S. incidence is significantly higher than that of primary ALCL of the breast in the general population,” the study says.

The FDA says the cancer usually develops years after implant surgery, with the median length of time between implant and cancer being seven years. It occurs regardless of whether the implants are filled with saline or silicone.

The ages of women involved in the FDA reports ranged from 25 to 91.

If identified in the early stages, this form of cancer is curable with surgery alone. Later detection may require chemotherapy if the cancer has spread.

Some research suggests that certain women may be genetically predisposed to developing BIA-ALCL.

The cancer was first identified in 1997 and first appears as an accumulation of seroma fluid between the implant and the fibrous scar tissue around it, according to the World Health Organization. In most cases, the cancerous cells remain in the fluid and do not move to the surrounding tissue, and the World Health Organization recommends treatment involving removing the implant and the fibrous capsule around it.

To diagnose the cancer, doctors drain some of the fluid that has accumulated around the implant and test it for evidence of a substance that indicates lymphoma.

If the cells do invade that surrounding tissue, there is a risk of involving the lymph nodes, requiring chemotherapy.

The FDA first identified a possible association between implants and the cancer in 2011.

According to the FDA, the main symptom of BIA-ALCL is persistent swelling or pain in the area of the breast implant. These symptoms often occur years after implant.

Because the cancer is rare, the FDA does not recommend removing breast implants where there are no symptoms – such as pain, lumps, swelling and asymmetry – and no evidence of fluid around them.

Women are encouraged to contact their doctors if they notice any of these symptoms in the area of their implants.