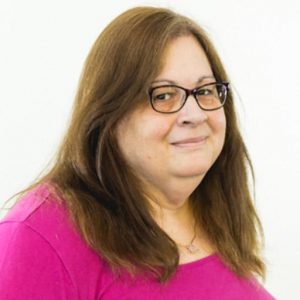 At Drugwatch, Elaine Silvestrini has reported about trials over whether talcum powder caused ovarian cancer and allegations that Androgel causes heart problems in patients who use it. She has chronicled the billions of dollars generated for big pharmaceutical companies by certain drugs and efforts to warn consumers about the dangers of specific medical problems.

Elaine has received six health literacy certificates for completing courses offered by the Centers for Disease Control and Prevention. Her coverage of talcum powder litigation for Drugwatch has been cited in the CDC’s Public Health Law News. She brings more than 20 years of experience covering state and federal court systems, learning the intricacies of criminal and civil law, developing investigative pieces about how the law affects people’s lives and digging through and digesting reams of court records on a daily basis.

Over her journalism career, she won numerous awards for writing, and she earned fellowships at Loyola Journalist Law School and the Dart Center for Journalism and Trauma, which puts journalists together with clinicians and scientists to learn about the effects of trauma on human beings.

Before coming to Drugwatch, she most recently worked as an assistant investigator for the Federal Public Defender where she helped track down witnesses, assisted in writing defense court pleadings and aided in clients’ defense at all stages of their cases.

Prior to that, Elaine worked for The Tampa Tribune for 13 years, covering courts and legal issues until the newspaper closed in 2016. While at the Tribune, Elaine wrote about everything from tax law to terrorism. One of her stories was about the end of litigation brought by the family of a boy who killed himself by slamming a stolen plane into a skyscraper in Tampa just four months after the Sept. 11 attacks. The family had sued Hoffmann-La Roche, the maker of the drug Accutane, which they blamed for their son’s actions. But they dropped the lawsuit because they felt physically and emotionally unable to continue with the hard-fought litigation that had been filed in 2002 and was dropped after five years. During depositions, the parents’ own psychological histories were questioned and probed. Their lawyer cited the “personal attacks” against the couple when the suit was withdrawn.

"Being part of Drugwatch is a great way to use my skills as a journalist to benefit people who were harmed through no fault of their own and hold large corporations accountable."

Prior to moving to Florida, she reported for 16 years at the Asbury Park Press in New Jersey. Her beats there included the courts, a military base, and mental health issues.

When Elaine was at the Asbury Park Press, her mother underwent a heart transplant. Elaine wrote about a prominent New Jersey resident who was in the same hospital unit as her mother, also awaiting a heart transplant, and about the group of patients who formed a community as they all waited together for months on end for someone else to die so they may survive. Elaine’s mother ultimately did receive a heart transplant and lived almost 10 years after the surgery.

She was the founding president of the Ochberg Society, an international organization of former Dart fellows and Dart award winners dedicated to sensitive coverage of victims of trauma, as well as the effects such coverage has on journalists. Part of the Dart Fellowship involved a trip to Rwanda where she met with people from non-governmental organizations, the government, and victims of the country’s genocide.

She is married, and she and her husband have three cats.