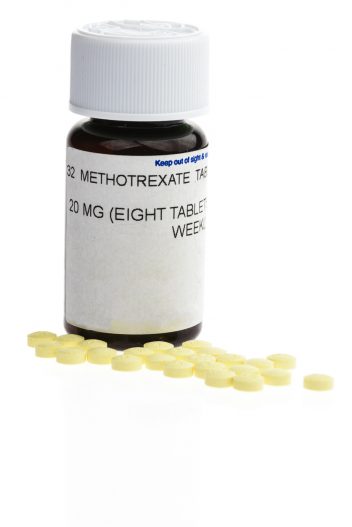 A double-blind, placebo-controlled, randomized clinical trial funded by the National Institutes of Health linked low-dose methotrexate to an increased risk of skin cancer, according to the study published in Annals of Internal Medicine.

Methotrexate belongs to a class of drugs known as disease-modifying anti-rheumatic drugs (DMARDs) and has been around since the 1950s. It’s a standard treatment for rheumatic diseases. The U.S. Food and Drug Administration approved it to treat conditions such as rheumatoid arthritis, psoriasis, leukemia and juvenile idiopathic arthritis — conditions that affect millions of Americans.

“We did this study because methotrexate is a widely used drug across the globe. About 5 million people take it weekly for rheumatoid arthritis. Even after three to four decades of its use, we’re still a bit uncertain about its side effect profile,” study author Dr. Daniel H. Solomon, a rheumatologist and clinical scientist at Brigham and Women’s Hospital at Harvard Medical School, said in a video statement released by Brigham and Women’s Hospital.

Researchers enrolled 6,158 patients and randomly assigned 4,786 to the methotrexate group or to the placebo group.

The most impactful statistic came from the researchers looking at methotrexate and cancer risk. Overall cancer risk was not increased. But skin cancer was increased about twofold in general with double the risk of melanoma and more than three times the risk of squamous cell skin cancer.

In addition to an increased skin cancer risk, researchers in the study linked the drug to an elevated risk of other adverse events from liver problems to blood abnormalities.

“The risk of all cause adverse events was about 30 percent increased in patients on low-dose methotrexate compared to placebo. So that’s an important finding,” Solomon said in the statement.

Other notable adverse event findings linked to methotrexate include:

This new study data adds more detail to the side effects already mentioned on the drug’s label. According the label, methotrexate’s most common side effects are: painful ulcers in the mouth (ulcerative stomatitis), low white blood cell count (leukopenia), nausea and abdominal distress.

The drug also has a black box warning — the FDA’s most serious warning — for embryo-fetal toxicity and fetal death.

Solomon said the study’s findings aren’t entirely new, but older studies were observational and not placebo-controlled. They didn’t have information on actual risk numbers.

Despite this information, Solomon was quick to add that he doesn’t recommend that patients stop taking the drug if it’s helping them. But the new data will better help doctors prescribe the drug with its risks and benefits in mind.