President Joe Biden signed the Camp Lejeune Justice Act of 2022 into law on Wednesday, Aug. 10, finally clearing the path to legal claims for those harmed by the four decades of contaminated drinking water on the Marine Corps base in North Carolina.

This act is part of the broader Honoring Our Pact Act of 2022, the most comprehensive toxic exposure legislation ever passed for U.S. military veterans and their families.

“This new law matters. It matters a lot,” Biden said at the signing. “It matters a great deal because these conditions already have taken such a toll on so many veterans and their families.”

The Congressional Budget Office estimates the Honoring Our Pact Act of 2022 will cost $278.5 billion over the next decade. It is expected to help more than 3.5 million veterans who served their country, many of whom were exposed to hazards such as Agent Orange, radiation and burn pits in the U.S. and other parts of the world.

“I am urging veterans of those decades of war to promptly file for your claims,” Biden said. “The VA will move as quickly as possible to resolve your claim and get you the benefits and the care you have earned.”

Were you diagnosed with cancer or another serious disease after exposure to the water at Camp Lejeune?
Get a Free Case Review

The U.S. Centers for Disease Control and Prevention determined that an estimated 900,000 people were potentially exposed to unsafe drinking water in the Camp Lejeune area from 1953 to 1987, the documented contamination period.

The groundbreaking legislation in the Camp Lejeune Justice Act prohibits the U.S. Government from asserting immunity in response to litigation involving the base’s contaminated water. 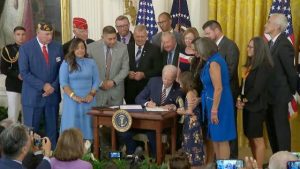 President Joe Biden signs the PACT Act into law at the White House.

It also overrides the North Carolina State law – the only one of its kind – that requires a cancer to be diagnosed within 10 years of the toxic activity for those affected to take legal action.

This legislation will finally allow those who were harmed to filed lawsuits against the government to recover damages, along with streamlining disability claims with the Veterans Administration.

“It’s fairness, tailor-made for people to get their day in court,” said Congressman Matt Cartwright (D-PA), who co-sponsored the legislation. “We are talking about contaminated water that led to people getting all sorts of horrible illnesses.”

Biden also noted in an earlier statement, “This bill will provide expanded access to health care and disability benefits for veterans harmed by toxic exposures, whether in the jungles of Vietnam or the mountains of Afghanistan. It will offer support to survivors who were harmed by exposures, including drinking water contamination at Camp Lejeune.”

The water contamination surrounding the military base has been responsible for a wide range of serious health issues, according to the CDC.

Records have shown that the well water was tainted by toxic chemicals such as perchloroethylene, trichloroethylene and benzene, among others.

Although people suspected problems for many years, water testing at Camp Lejeune didn’t uncover the sources of contamination until the early 1980s. In some instances, the contamination was 300 times the acceptable level.

The contaminated wells were closed by the mid-1980s, but the long-term health problems were just beginning. Some veterans did not receive a cancer diagnosis until several years after they were exposed.

Legislation passed in 2017 provided disability benefits totaling more than $2 billion to veterans and family members who experienced health problems caused by the toxic water, but many who were denied help remained frustrated.

The VA has been providing disability compensation for decades, but many of those who applied were denied. CBS News reported earlier this year that the VA rate of approval for compensation claims was less than 20%.

That number is expected to rise quickly under this latest legislation.

Any veteran or family member who resided, worked or was otherwise exposed (including utero exposure) to the water at Camp Lejeune for at least 30 days between August 1, 1953, and December 31, 1987, is eligible to bring legal action against the government for damages.

Cases will be handled by the United States District Court for the Eastern District of North Carolina.

No punitive damages will be awarded under the law.