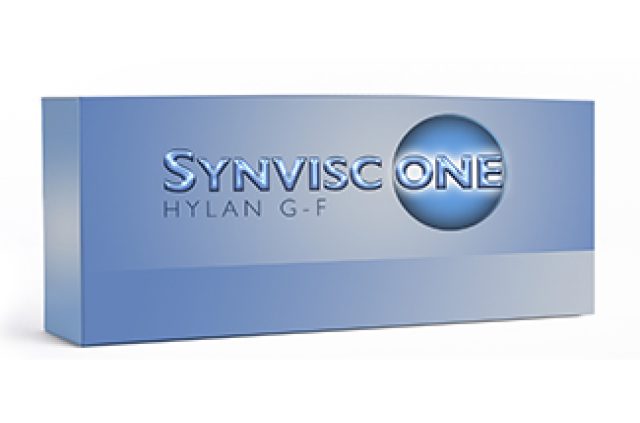 Julia* had always lived an active life. The Massachusetts grandmother is a nurse, a lawyer and a veteran. When knee arthritis slowed her down, she thought she’d found the perfect treatment: Synvisc-One.

Synvisc-One is a hyaluronic acid-based gel. Doctors inject it into the knee to replace natural synovial fluid.

The manufacturer claims Synvisc-One creates a cushion between bones in the knee. And that a single shot can relieve pain for up to six months.

Julia says she had “three or four” treatments for her knee arthritis.

“I walked into the last Synvisc-One appointment without any assistance,” she told Drugwatch. “Three years later, I have to use a cane or a walker to get around. And the pain never quits.”

Julia had run into a Synvisc-One adverse event. By the time doctors figured out what was wrong, it was too late to treat.

“My life has changed way for the worst,” she said. “I can’t go to anything with my grandkids. They’re all in sports, and I’d love to be there, but I can’t do it.”

Genzyme makes Synvisc-One from chicken combs — the fleshy growth on the birds’ heads. It looks like a drug in a prefilled syringe. But the U.S. Food and Drug Administration considers Synvisc-One a medical device.

The company recalled 18,000 prefilled syringes of Synvisc-One in December 2017. An investigation turned up hard-to-treat bacteria in some of the syringes. Patients blamed the tainted lot for serious knee infections.

Julia didn’t suffer an infection. But she experienced another Synvisc-One side effect that’s gained notoriety. Case studies have found the injections can sometimes cause pseudoseptic arthritis. It’s a form of pseudosepsis — symptoms that mimic a joint infection.

Reports of pseudoseptic arthritis after hyaluronan injections date back to at least 2004. Synvisc-One’s prescribing information calls it rare. Recent studies are finding it more often.

A 2017 study said pseudoseptic reactions to Synvisc-One injections are a “common occurrence.” Researchers said it was more common “after a second or third round of treatment.”

Synvisc-One Side Effects Can Happen Quickly

Another 2017 study found pseudosepsis symptoms most often happen within two to 48 hours. Julia recalls feeling Synvisc-One side effects for the first time on the drive home from her last injection. She fought drowsiness in the car.

Julia got home and went to sleep. When she woke up, she was in pain. Her knees were swollen, snapping and misshapen. She called her doctor who told her to treat the aches and swelling with ice and Tylenol.

Within a couple of days, Julia says she started falling down. The falls continued as she sought a diagnosis and treatment.

“By the seventh fall, I broke my neck,” she said.

Julia needed surgery to fuse vertebrae and implant a metal plate in her spine.

Julia’s last appointment was in June 2015. A month before, a study raised the alarm on Synvisc-One and pseudoseptic arthritis.

“Pseudoseptic arthritis is an increasingly recognised entity,” researchers wrote in the journal BMJ Case Reports. “It is a diagnosis of exclusion.”

That was the problem Julia hit head on. Doctors had to rule out everything else before they landed on the actual problem. And they weren’t always aware of pseudoseptic arthritis at the time.

Julia contacted the manufacturer, Genzyme, and spoke with a company nurse. The nurse told her she might have pseudoseptic arthritis. But her doctor discounted the idea. Instead, he prescribed oxycodone for her pain.

She went to three hospitals trying to find out what was wrong. She finally found a diagnosis that brought her full circle.

“This is a year later now. And the doctor said, ‘You had a systemic reaction, pseudoseptic acute arthritis. And we usually treat it right away with prednisone,’” Julia said.

Pseudoseptic acute arthritis usually requires a week-long treatment with the common steroid. But the treatment needs to happen right away.

“It was too late for me,” she said. “So he bid me adieu, sent me for physical therapy and ever since, I’ve been dealing with it.”

Pseudosepsis is not listed as a side effect in Synvisc-One’s prescribing information.

“I don’t feel like I had enough information. I don’t think the doctor was informed. She never would have told me to just use Tylenol or ice packs if she knew what the real dangers were,” Julia said.

The Synvisc-One package insert mentions the symptoms of pseudoseptic arthritis, without ever mentioning the condition’s name. It’s part of a short, three-paragraph section on clinical trials for the gel.

“Clinical benefit from the treatment may still be apparent after such reactions,” the section concludes.

That was not Julia’s experience.

“I still have pain, and I’m still being treated,” she told Drugwatch. “And I can foresee that I’ll probably need at least one knee replacement eventually. I know I’ll never be the same.”

*Name has been changed. Drugwatch is withholding this source’s identity to protect her privacy.