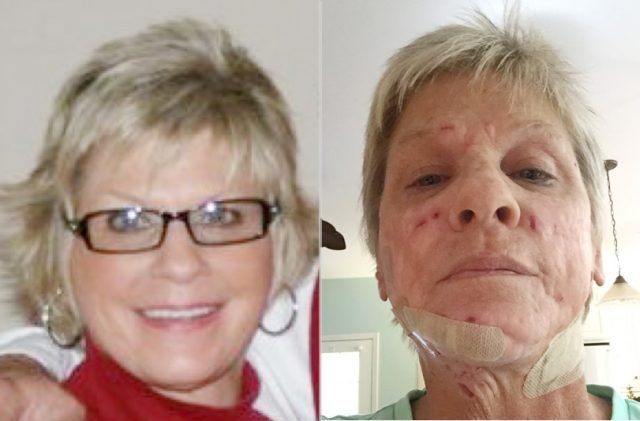 Anne Scott didn’t like what she saw in the mirror.

She was 48 years old and she didn’t like the signs of aging on her face. “I just wanted to look younger,” she says.

She went to a plastic surgeon she had seen on television. She wanted a mini facelift, a chemical peel. She wanted the corners of her mouth turned up.

That was 10 years ago. Now she can barely leave her house near Charleston, S.C.  Physically, she can’t even smile.

In addition to the other procedures, the surgeon used a product called Sculptra to fill in the lines in her face, she says. The doctor, she says, was not trained then on how to use the product and didn’t know what he was doing.

The procedure, she says, has been the worst thing that ever happened to her.

To this day, she is in constant pain.

It began six to eight months after the procedure.

She started noticing what she describes as “little tiny things like whiteheads coming out…It looked like fishing line. Then it had a little ball on the end.” First it appeared on her face on her left jaw line where the Sculptra had been injected. Then it moved to the right jaw. Then it went to her cheeks and her neck. It closed her pierced earholes.

They’re called granulomas, and they bleed profusely, Scott says. She lost so much blood, she became anemic.

A granuloma is a chronic inflammatory reaction that appears as a tumor made of a collection of giant immune cells.

They have sprouted all over her body, except her nose and forehead. They leave permanent scars.

“Every three or four months, they’ll surface and come to the top,” she says. “So many of them.” They’ve even sprouted in her vagina, causing major itching and pain. They skipped the upper halves of her legs and went to the lower halves. Then they came out of her feet.

They remove the pigmentation of her skin. They’ve hit her elbows and arms. The backs of her legs are more affected than the fronts.

She waits until they get to a certain stage and will pluck them out. “You’ll take a thousand out and they keep coming,” she said.

Sculptra Side Effects Include Nodules, Granulomas

According to the U.S. Food and Drug Administration, Sculptra Aesthetic is an injectable implant containing microparticles of poly-L-lactic acid (PLLA), carboxymethylcellulose, non-pyrogenic mannitol and sterile water.

The product is made by Sanofi Aventis.

The FDA says PLLA is a biodegradable, biocompatible man-made polymer. It is used in absorbable stitches and bone screws. PLLA is a long lasting filler material that is usually given in a series of injections over a period of several months.

Several side effects have been linked to Sculptra, including scarring, skin discoloration, nodules, lumps and granulomas.

Researchers say that granuloma formation after implantation of injectable skin fillers is a rare side effect, occurring in between 0.02 percent and 1 percent of patients. They happen several months to years after injection.

The Sculptra label describes a study involving rabbits in which the animals had “several relatively large remnants of injectable PLLA visible at 64 weeks after implantation…described as chronic granulomatous reaction characterized by foreign body giant cells and macrophages.” A macrophage is a large cell that engulfs a solid, foreign particle.

Negatively affected by a drug or medical device? Share Your Story

Anne Scott says she has been to 36 doctors around the country, and no one can help her. She had surgery at Johns Hopkins, and granulomas pushed her stitches out.

Four doctors told her to see a psychiatrist. She went to one for 11 months, and he told her she needed to go to a major medical university. So she did.

They break out of her skin every day, but she has to wait for them to get through the skin and big enough for her to take them out with tweezers. She knows they’re about to appear because the itching intensifies.

The pain and the bleeding and the disfigurement has left Scott housebound.

“I’m bored,” she said. She spends her time researching doctors. She had to leave her banking career to take care of her father.

And her husband is self-employed as an electrical commercial contractor. Their insurance is inadequate to cover her medical bills. Their retirement savings are depleted.

She takes hydrocodone pills to mitigate the pain, but limits that to before bed and when she awakes in the morning.

“I’ll wake up in a pool of blood,” she said. “I can’t even describe how much it will bleed.”

“I’m very outgoing,” she says. “We have a lot of friends in this town. It’s a small town. I haven’t been downtown to have dinner at night in five years since I got to the point where I was so disfigured.”

She said people judge her when they see her. “I don’t look like the same person.”

She ran into someone in Walgreens she hadn’t seen in awhile. “Oh, Anne,” the woman said. “I’m sorry.”

“That’s not what I want to hear,” Scott said. “I don’t want their pity. I want a doctor to be responsible. I want somebody to fix me.”