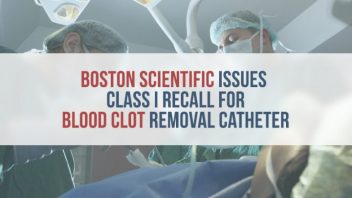 Boston Scientific issued a recall for thousands of devices used to remove blood clots from the heart because they can break, obstruct blood flow and cause other problems.

The Massachusetts-based medical device company recalled 21,155 Fetch 2 Aspiration Catheters manufactured from June 11, 2014 to Feb. 19, 2016. The U.S. Food and Drug Administration classified the recall as a class I meaning there is reasonable probability the “use of or exposure to [the] violative product will cause serious adverse health consequences or death.”

Bayer originally manufactured the devices and sold its interventional unit to Boston Scientific in September 2014 for $415 million. The recalled device packages still have the Bayer label.

Doctors use aspiration catheters such as the Fetch 2 to clear blood clots from coronary arteries in a procedure known as thrombectomy. These long, flexible devices push through the arteries and vacuum clots from the vessels. This removes the obstruction and allows blood to flow more freely.

Boston Scientific issued the recall because of reports of shaft breakage. These broken pieces can travel in arteries and block blood flow, causing serious health problems — even death. The broken shaft would need to be surgically removed.

“All reports of shaft breakage happened during the procedure, and the broken section was either removed while still partially attached to the catheter shaft or retrieved with a snare, without further patient complications,” Boston Scientific said in a statement.

The company said there were no reports of injury or death and patients who already underwent the procedure are not at risk.

Healthcare facilities should discontinue use of the Fetch 2 catheters immediately, the FDA added in an announcement.

This is not the first heart device prone to breakage recalled by the company. In Aug. of 2015, the device maker issued another class I recall for its RotaWire Elite and wireClip Torquer Guidewire and Guidewire Manipulation Device, and the FDA announced it in Nov.

Surgeons use these drill-like devices to clean out plaque in the heart’s arteries. A long wire attached to the devices helps surgeons navigate inside arteries. The company recalled the device after it received reports of burr migration into the heart. One patient died because of blood vessel perforation and another required surgery to remove the fragment.

“In August, Boston Scientific voluntarily recalled all of its RotaWire Elite Guidewire and wireClip Torquer Guidewire Manipulation Device due to the possibility of wire fracture. These devices were in limited distribution and we have contacted all of the affected hospitals accordingly. Please note that this action does not apply to original RotaWire Guidewires,” Boston Scientific said in an emailed statement.

For the past several years, Boston Scientific has also been fighting thousands of lawsuits filed by women who say the company’s transvaginal mesh implants caused them serious permanent injuries.

Doctors use these implants to treat incontinence and pelvic organ prolapse in women, but many patients report complications such as painful sex, organ perforation, excessive bleeding and nerve damage. More than 19,000 lawsuits are pending in West Virginia before Judge Joseph R. Goodwin.

The company’s ProtoGen was the first mesh sling manufactured, but it was later removed from the market in 1999 for safety concerns. The FDA approved a number of mesh products on the market based on the ProtoGen.