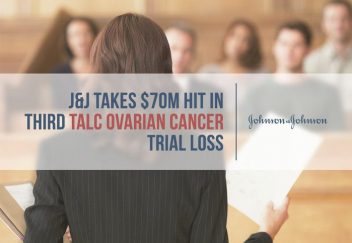 Johnson & Johnson received its third trial loss in a row over claims its talc powder can cause ovarian cancer after a St. Louis jury recently awarded nearly $70 million to a cancer patient. In a 9-3 vote, the jury awarded compensatory and punitive damages to 63-year-old Deborah Giannecchini, who said J&J’s talc powder caused her Stage IV ovarian cancer.

Johnson & Johnson said it would appeal. The pharmaceutical giant lost the last two trials with verdicts of $72 million and $55 million. In previous talc trials, juries absolved the company of liability.

“I’ve waited for a long time for this,” Giannecchini told Bloomberg. “I’ve wanted this so badly.”

The plaintiff used J&J’s baby powder for about 40 years until she received her ovarian cancer diagnosis. Her doctors say she has an 80 percent chance of dying in the next two years.

The connection between talcum powder and ovarian cancer surfaced in the 1970s.

According to a handful of studies, the fine powder could cause cancer after talc particles travel from the genitals through the cervix and embed in ovaries.

In 2013, researchers at Brigham and Women’s Hospital found between 20 and 30 percent of women who used talcum powder for personal hygiene had an increased risk.

Plaintiffs’ attorneys stand by these results.

“Yet another jury has heard the evidence outlining a link between Johnson & Johnson’s talcum powder products and ovarian cancer, and has decided that there is a clear connection,” Ted Meadows, Giannecchini’s lawyer, told The National Law Journal.

There are roughly 2,000 talc lawsuits pending in several courts across the country — the majority are against J&J.  Despite the losses, J&J continues to challenge verdicts.

“We will appeal today’s verdict because we are guided by the science, which supports the safety of Johnson’s baby powder,” J&J spokeswoman Carol Goodrich told The National Law Journal.

Jurors in this trial felt the baby powder manufacturer should have added warning labels on its talc products, which include Johnson’s Baby Powder and Shower-to-Shower.

During the trial, plaintiff’s lawyers said the drug giant was aware of “30 years of studies showing an increased risk of ovarian cancer from the use of talc,” Bloomberg reported. “They knew, and they knew the public was unaware of the risk,” said Allen Smith, another attorney for Giannecchini. Smith also said J&J developed a strategy to prevent government regulation of its products.

This third trial loss for J&J brings the total to about $200 million awarded to plaintiffs. Ovarian cancer is not the only cancer linked to talc. A California jury awarded $18 million to a man who said talcum powder caused his mesothelioma — a rare cancer that affects the lining of the lungs.

J&J continues to deny the link between talc and ovarian cancer.

“Science, research, clinical evidence and decades of studies by medical experts around the world continue to support the safety of cosmetic talc,” Goodrich said.