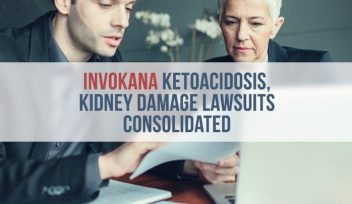 Invokana and Invokamet belong to a class of Type 2 diabetes drugs called SGLT2 inhibitors that work by stopping the kidneys from reabsorbing blood sugar. The excess sugar then passes out of the body in urine.

But, based on studies and adverse event reports, the U.S. Food and Drug Administration issued a warning that the drugs may increase the risk of ketoacidosis — a potentially fatal condition where toxins build up in the blood — and kidney damage.

So far, multidistrict litigation against Janssen Pharmaceuticals, a subsidiary of Johnson & Johnson, involves 55 lawsuits. Plaintiffs allege Invokana may cause a number of serious injuries and Janssen failed to adequately test the drug and warn patients and doctors of risks.

Consolidation Will Improve Efficiency of Litigation

The cases have enough similarities to consolidate for the sake of simplifying and expediting litigation, the Panel said.

“The actions share factual questions arising from allegations that taking Invokana or Invokamet may result in patients suffering various injuries, including diabetic ketoacidosis and kidney damage,” the Panel said in its order. “The actions thus implicate numerous common issues concerning the development, manufacture, testing, regulatory history, promotion, and labeling of the drugs.”

Janssen agreed to consolidation in New Jersey, but intends to “vigorously defend against the allegations made in these lawsuits,” a spokesman told The Legal Intelligencer.

Studies show other drugs in the SGLT2 class, such as Farxiga (dapagliflozin) and Jardiance (empagliflozin), may also cause the same health problems and some plaintiffs filed lawsuits against the drugs’ makers. The Panel is aware of at least 20 cases which involve Farxiga, Jardiance or a combination of SGLT2s.

But the New Jersey MDL is only for Invokana and Invokamet.

“Centralizing competing defendants in the same MDL may unnecessarily complicate case management, due to the need to protect trade secret and confidential information,” the Panel said.

One of the side effects of Invokana is urinary tract infections. In December 2015, the FDA warned these UTIs had the potential to turn into serious, potentially life-threatening blood and kidney infections.

Then, in 2016, the FDA identified reports of serious pancreatitis in patients taking Invokana and other SGLT2 inhibitors. Acute pancreatitis occurs when the pancreas swells and becomes inflamed. According to the FDA, it is “evaluating the need for regulatory action.”

The next step in Invokana’s MDL litigation will be pretrial proceedings before Judge Martinotti, according to the Panel’s order.