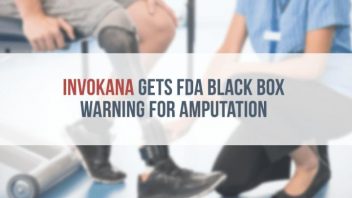 The U.S. Food and Drug Administration added a black box warning to the label of Type 2 diabetes medication Invokana (canagliflozin) describing the risk of foot and leg amputations.

“Based on new data from two large clinical trials, the FDA has concluded that the type 2 diabetes medicine canagliflozin (Invokana, Invokamet, Invokamet XR) causes an increased risk of leg and foot amputations,” the agency said in its Drug Safety Communication released on May 16, 2017.

The black box warning is the agency’s strongest warning meant to inform patients and doctors of serious hazards associated with medications. The FDA only adds the warning when there is sufficient evidence of a hazard.

The agency’s action came after it reviewed the final results from two clinical trials — the Canagliflozin Cardiovascular Assessment Study (CANVAS) and A Study of the Effects of Canagliflozin on Renal Endpoints in Adult Participants with Type 2 Diabetes Mellitus (CANVAS-A).

Data from these trials showed that leg and foot amputations occurred twice as often in patients treated with Invokana as those treated with placebo.

Toe and middle of the foot amputations were the most common, but amputations of the leg below and above the knee also occurred, according to the safety communication. Some patients had multiple amputations.

Approved in 2013, Invokana was the first in the class of medications called sodium-glucose co-transporter 2 (SGLT2) inhibitors. These drugs work by stopping the reabsorption of blood sugar in the kidneys and removing it through urine.

The amputation warning is the first black box warning for Invokana, though the FDA has issued a long list of safety communications for the medication since it hit the market.

In May 2015, the FDA warned that Invokana and other SGLT2-inhibitors could increases the risk of a serious condition called diabetic ketoacidosis (DKA). DKA occurs when toxins called ketones build up in the blood and it can lead to coma and death if left untreated.

Hundreds of patients filed DKA lawsuits against the drug’s maker, Johnson & Johnson, and its subsidiary, Janssen Pharmaceuticals. About 300 of these cases are pending before U.S. District Judge Brian R. Martinotti in New Jersey.

In December 2015, the FDA added label warnings for urinary tract infections that could lead to blood infections (urosepsis) and kidney infections (pyelonephritis).

The FDA urges people who take Invokana to pay attention to issues that could lead to amputation, including sores, tenderness, ulcers or infections in the feet or legs. Health care providers should discontinue Invokana if these symptoms or complications occur.