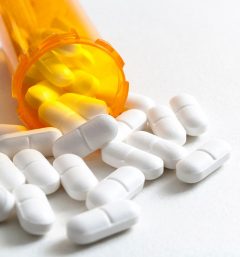 Opioids are a class of drugs that reduce pain by replicating naturally occurring chemicals in the opium plant. They include prescription pain medications such as OxyContin (oxycodone), Vicodin (hydrocodone), morphine and others. But they also include illegal street drugs like heroin and fentanyl.

Opioids are powerful painkillers, and health care providers typically prescribe them to patients to treat moderate-to-severe pain. Some uses include controlling pain from surgery, pain from an injury such as a broken bone or pain from cancer. But there has been a recent increase in opioid use for chronic, non-cancer pain including headaches, back pain and arthritis, despite serious risks and lack of evidence for long-term use.

Opioid Prescriptions in the United States
Health care providers prescribed about 168,158,611 opioid prescriptions to Americans in 2018.

While opioids can help people control severe, acute pain when taken for short durations, they are highly addictive and can be misused. Because of this, the U.S. Food and Drug Administration and Centers for Disease Control and Prevention discourage opioids for long-term use.

In 2018, health care providers prescribed about 51 opioid prescriptions for every 100 people in the United States, according to the most recent data from the Center for Disease Control and Prevention. That breaks down to about 168,158,611 prescriptions.

Alabama, Arkansas and Tennessee have the highest prescription rates at 81.8 to 97.5 prescriptions per 100 people, according to the CDC.

How Do Opioids Work?

Opioid drugs attach to these receptors, block pain signals and release large amounts of dopamine, a chemical that controls how the body feels pleasure. This effect makes people feel relaxed and happy.

These drugs create various sensations by attaching to different receptors in the body, including the limbic system in the brain, the brainstem and the spinal cord.

Some effects of opioids in the brain and nervous system include:

There are three different types of prescription opioids, according to the National Institute on Drug Abuse. These are: natural, semisynthetic and synthetic.

Synthetic opioids are completely made in labs. Some are available by prescription, but they are also sold illegally, such as carfentanil and fentanyl. People sometimes use these types of drugs to get high.

The terms “opioids” and “opiates” may be used interchangeably, but they refer to different types of drugs. Opioids are all synthetic, semisynthetic and natural opioids. Opiates are specifically natural opioids such as codeine, heroin and morphine.

Side Effects of Opioids

Opioids can help relieve pain, but they also come with some harmful side effects. These effects can be both short term and long term. Taking opioids as prescribed at the lowest dose for the shortest amount of time will help avoid side effects.

Researchers are still studying the long-term side effects of opioids. But these effects can lead to serious health problems that can be fatal.

Long-term effects of opioids include:

Opioids can interact with a number of medications, including many over-the-counter drugs. One of the most dangerous interactions happens with allergy and cold medicines that cause drowsiness. When taken with opioids, this effect intensifies. It can slow the heart and breathing, increasing the risk of death.

Drugs that may interact with opioids include:

An opioid overdose happens when too much of the drug overwhelms the body. Opioid overdoses interfere with the body’s ability to breathe and can be fatal.

Nearly 450,000 people died from opioid overdose between 1999 and 2018, according to the CDC. The first wave of deaths occurred in the 1990s with prescription opioids. In 2010, the deaths were linked to heroin. From 2013 to the present day, most opioid overdoses involve synthetic opioids such as fentanyl.

Overdose deaths remain high. In 2018, nearly 70 percent of the more than 67,000 drug overdose deaths involved an opioid, according to the CDC.

Symptoms of an opioid overdose include:

If you suspect someone is overdosing, the CDC recommends calling 911 immediately. If you have access to naloxone, a drug that can stop an opioid overdose, administer it by injecting it into a muscle or spraying it in the nose.

Keep the overdose victim awake and breathing and lay them on their side to prevent them from choking. Wait for emergency personnel to arrive.

According to the Department of Health and Human Services, this occurred because pharmaceutical companies told the medical community that these drugs were not addictive. But increased prescribing led to misuse of the medication and addiction to non-prescription and prescription opioids.

HHS declared the opioid crisis a public health emergency in 2017.

More than 130 people die each day from opioid overdoses, and about 10.3 million people misused prescription opioids in 2018, according to HHS.

The crisis led several states, cities, towns and counties to file opioid lawsuits against drug manufacturers. These lawsuits claim drug companies misled the public about the addictive nature of opioids.