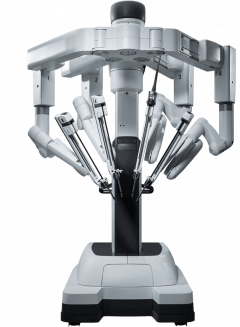 Before the creation of robotic surgery systems, an electric arc burning the insides of patients wasn’t something that generally happened. Surgeons didn’t have to worry about charred surgical instruments, and their hands and instruments didn’t freeze or move erratically because of computer system errors during surgery.

But all of these have been reported to the U.S. Food and Drug Administration as adverse events — or instances where something went wrong — associated with the use of the da Vinci Surgical System and other robotic surgical systems.

Reports of complications with da Vinci Surgery are extremely rare, but those that do happen can be quite severe. Manufacturer Intuitive Surgical Inc. warns on its website of potential risks and complications with its devices. These include the loss of a large amount of blood, as well as possible inadvertent cuts, tears, punctures, burns or other injuries to organs, tissues, major blood vessels or nerves.

Intuitive also says complications could involve the loss of a piece of the instrument, such as a needle or other object used during surgery, inside the patient’s body. Also, the patient could be injured because of the position of his or her body during surgery.

The FDA has an online database of all reports of problems that have occurred with regulated medical devices. The Manufacturer and User Device Experience, or MAUDE, includes thousands of incidents related to the use of various da Vinci robotic systems, ranging from error code bugs to patient deaths. The reports are filed by manufacturers, health care facilities, patients and lawyers.

In a study titled “Adverse Events in Robotic Surgery: A Retrospective Study of 14 Years of FDA Data” researcher Homa Alemzadeh and colleagues looked at 14 years of reports to the FDA at a time when 1.75 million robotic procedures were performed.

Fact
The FDA received more than 8,000 reports of robotic-surgery malfunctions during a 14-year period.

More complex surgeries such as heart, head and neck procedures had higher numbers of injuries and deaths than surgeries for which robots are used more often, such as gynecological and urological procedures. Surgeons had to wait for the system to restart, or they had to switch to non-robotic techniques or reschedule procedures more than 10 percent of the time.

“Despite widespread adoption of robotic systems for minimally invasive surgery in the U.S., a non-negligible number of technical difficulties and complications are still being experienced during procedures,” the authors wrote. “Adoption of advanced techniques in design and operation of robotic surgical systems and enhanced mechanisms for adverse event reporting may reduce these preventable incidents in the future.”

According to the FDA database, in five years ending on Aug. 31, 2017, the agency received 30 reports of incidents in which the patient died in connection with surgery using the da Vinci system. The system did not necessarily cause those deaths, but they occurred after or during surgery in which surgeons used the system. During that same time period, the FDA received 282 reports involving patient injury.

Examples of adverse events reported to the FDA

In addition, patients have filed lawsuits alleging that they suffered injuries such as spleen and liver punctures during heart surgery, rectal damage during a prostate operation and a vaginal hernia during a hysterectomy.

In an incident reported in the July 2008 edition of Journal of Robotic Surgery, an arm of the robotic system broke during a prostatectomy, requiring the surgeons to cut a larger incision in the patient to remove the piece from inside his body.

Experts say that the main contributing factors to robotic surgery adverse-event reports are:

A study in 2014 by researchers at Columbia University College of Physicians and Surgeons compared robotic and laparoscopic adnexal surgery. Adnexal surgery is surgery performed on the ovary, fallopian tube or ovarian cysts.

The study looked at 87,514 women between 2009 and 2012, a period when robotic surgery on the ovaries increased from 3.5 percent to 15 percent. The study found the overall complication rate was 7.1 percent for robotically assisted surgery compared with 6 percent for laparoscopic removal of the ovaries.

“Compared with laparoscopic surgery, robotically assisted adnexal surgery is associated with substantially greater costs and a small, but statistically significant, increase in intraoperative complications,” according to the study published in Obstetrics and Gynecology.

However, a 2015 study in JAMA Surgery that compared robotic-assisted versus non-robotic cardiac surgery found significantly fewer complications, shorter hospital stays and fewer deaths for the procedures that involved robots.

This tilted position provides the best exposure of the pelvis and lower abdomen for robotic surgery. The positioning is required to provide access to the surgical field and accommodate the robotic camera system and arms, particularly with robotic gynecologic surgery.

However, in traditional laparoscopy, a patient can be moved during surgery to compensate for slipping on the table. This is not possible during robotic surgery. The robot can’t compensate for changes in the patient’s location on the operating table.

The positioning can lead to the patient shifting during surgery, causing bruising and other neuromuscular injuries. This shifting can create tears in incisions and the formation of hernias after surgery. It can add to postoperative pain related to the stretching of the abdominal wall.

Patients may also awaken with swelling of their faces and larynx. The position for long periods can also lead to swelling of the brain and increased intracranial pressure.

The American Association of Retired Persons Magazine reported the case of Paul Elliott, a 55-year-old public high school teacher in California who awoke from having his prostate removed with no feeling in his shoulders and arms. Because he was in the tilted position during the eight-hour, robot-assisted operation, Elliott suffered nerve damage and never regained full use of his left hand.

Prolonged pressure on a particular body part can cause rhabdomyolysis, which is a serious syndrome that results from the death of muscle fibers and the release of their contents into the bloodstream. This can lead to problems including pain, kidney failure and even death.

The patient’s face, and specifically eyes, can be injured during robotic surgery if the robotic camera system comes in contact with that part of the body. In some instances, the camera system may be just a few centimeters away from the face during surgery.