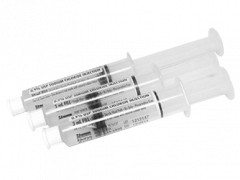 IV flush syringes are common medical devices used to clear intravenous lines. When used correctly, saline flushes are generally safe and well tolerated by patients, but complications can occur. Although rare, IV flush syringes can introduce air embolisms into a vein, which can lead to heart attacks, strokes and respiratory failure. Contaminated syringes have been linked to serious bacterial infections in patients. In rare cases, a serious allergic reaction may occur.

The plastic syringes contain normal saline (0.9 percent sodium chloride). Saline flushes rarely cause problems for the patient, and when they do, the problems are generally minor.

When a saline flush is used, patients may notice a cold sensation in their skin where the IV is located. While this may feel slightly uncomfortable, it’s completely normal because the fluid is room temperature. It should go away after the flush is complete.

Common Side Effects
It’s not uncommon for patients to notice a temporary cold sensation or an unpleasant taste or smell after their IV catheter is flushed with saline.

Although this common reaction is harmless, it can be nauseating, especially if a patient is receiving chemotherapy. Sucking on a piece of hard candy may help to alleviate any bad taste.

While rare, other more serious complications can also occur. These include serious allergic reactions, air embolisms and fluid overload in patients with certain pre-existing medical conditions. Over the past decade or so, contaminated saline syringes have also caused serious bloodstream infections and several deaths.

Commercially prefilled saline syringes are generally said to decrease the risk of infection. However, there have been reports of infectious outbreaks, according to the Vanderbilt University study.

In 2016, a Texas-based company called Nurse Assist recalled its Normal Saline Flush syringes following a reported outbreak of Burkholderia cepacia bloodstream infections in 164 patients at dozens of long-term care and rehab facilities across the country.

Seven patients died from their infections from the antibiotic-resistant bacteria, which was identified in unopened packages of syringes. People with weak immune systems were more vulnerable to the infections, according to a recall notice issued by the U.S. Food and Drug Administration.

According to the Centers for Disease Control and Prevention, symptoms associated with bloodstream infections include:

Other contamination incidents involving prefilled saline flush syringes have included a 2008 recall of IV saline flush syringes distributed by B. Braun Medical. The syringes in question, which were manufactured by a vendor called AM2PAT, were contaminated with bacteria known as Serratia marcescens. Five people died and hundreds became sick in the outbreak.

An air embolism occurs when one or more air bubbles enter a vein or artery causing a blockage of blood flow. Air can accidentally be injected into a vein via a syringe or IV. That’s why it’s crucial that your nurse expels any extra air from the syringe, or from associated IV tubing, before performing any injections.

Most air embolisms are minor, causing only mild symptoms or no symptoms at all. These usually resolve on their own with no serious consequences. But in rare cases, air embolisms can travel to vital organs, such as the brain, heart or lungs and possibly lead to a heart attack, stroke or respiratory failure.

Signs and symptoms of a potentially dangerous air embolism may include:

A loud churning heart murmur known as a “cog wheel murmur,” or “mill wheel murmur,” is a late sign of an air embolism. According to a 2009 study in the Journal of the American Association for Laboratory Animal Science, the “splashing” noise is caused by the presence of gas in the chambers of the heart.

It takes just 0.5 to 1 milliliter of air in the pulmonary vein to cause a cardiac arrest, and just 2 to 3 milliliters of air injected into the cerebral (brain) circulation to potentially lead to death by stroke, according to Medical News Today. Therefore, all air bubbles trapped in the body’s blood vessels must be treated as an emergency requiring immediate medical attention.

Other serious complications associated with a sodium chloride flush include fluid overload and a hypersensitivity reaction. Both are extremely rare but can be life-threatening.

Fluid overload is a condition where there is more fluid in the bloodstream than the body can handle. Those most at risk for fluid overload are patients with congestive heart failure, severe kidney impairment, liver problems or high blood sodium levels (hypernatremia).

Signs and symptoms of fluid overload include:

As histamine is released in various parts of the body, the airways can begin to tighten and other severe symptoms can result.

Other possible symptoms of a reaction to saline solution include:

Anaphylaxis is a medical emergency that requires immediate medical attention.