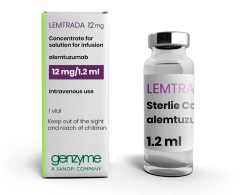 Lemtrada is a monoclonal antibody made by Sanofi Genzyme to treat relapsing forms of multiple sclerosis (MS). The Food and Drug Administration (FDA) originally approved the drug’s active ingredient, alemtuzumab, under the brand name Campath in 2001 to treat a type of cancer called B-cell chronic lymphocytic leukemia (B-CLL). In 2014, the FDA approved Lemtrada to treat MS.

In clinical trials, Lemtrada was shown to be more effective than Rebif in slowing the  disability caused by MS  and preventing  relapses.  According to Sanofi Genzyme’s 2018 financial report, more than 60 countries have approved the drug to treat adults with relapsing forms of MS. Worldwide net sales of the medication in 2018 were roughly $450 million.

Common side effects of Lemtrada include rash, thyroid problems, infections, body pain, tiredness, trouble sleeping, vomiting and temporary reddening of the skin. However, Lemtrada can also cause more serious side effects and the use of the drug has been restricted by the FDA due to these potential side effects. These effects include autoimmune conditions, infusion reactions and cancer.

Doctors can only prescribe the medication to patients who have not had enough of a response to two or more MS drugs. To be able to dispense, administer or receive the drug, doctors, hospitals, pharmacies and patients must be enrolled in a restricted distribution program called the Lemtrada Risk Evaluation and Mitigation Strategy (REMS) Program.

Lemtrada REMS Program
Prescribers, hospitals, pharmacies, and patients in the United States must enroll in the Lemtrada Risk Evaluation and Mitigation Strategy (REMS) Program to be able to prescribe, dispense, administer and receive the medication.

The drug’s label includes a black box warning for the risk of autoimmune conditions, infusion reactions, stroke and cancer. These warnings are the reason the FDA has restricted use of the drug and has required the drug company to start and manage a REMS program.

The FDA warned the drug could also cause tears in the lining of blood vessels in the head and neck, and lawyers are filing Lemtrada lawsuits on behalf of patients who suffered strokes, head or neck arterial dissections, and/or death.

Doctors believe these immune cells are overactive in people with MS. This causes them to attack the protective outer layer around nerve cells called the myelin sheath. Eventually, this damages the nerves. The damaged nerves can no longer properly carry signals to the brain or other parts of the body.

Researchers think Lemtrada targets these B cells and T cells and removes them.

About 30 days after treatment, the drug is undetectable in the body, and the immune cell levels begin to increase over time. After about six months, the B cells levels return to normal, but the T cell levels remain lower than they were before treatment. This effect lasts for at least a year.

What to Expect with Lemtrada Infusions

A doctor’s office, clinic or hospital will administer the drug through intravenous infusion. Because of serious risks associated with the drug, patients cannot administer the medication themselves at home.

Before the infusion, the health care provider will give the patient drugs that will prevent or lessen the effects of infusion reactions. These may include corticosteroids, antihistamines and anti-fever medications called antipyretics.

Patients should tell their health care provider immediately if they experience discomfort or anything unusual during their infusion.

Providers may slow down the infusion or stop it temporarily if there are signs of a reaction. They may also administer additional medication to prevent reactions. In some cases, doctors may stop the infusion completely.

Due to the risk of infection, patients who start Lemtrada also need to take a medicine to prevent herpes infection. The medicine will start on the first day of each treatment course and continue for at least 2 months after Lemtrada treatment.

Lemtrada comes in a single-dose 12 mg vial for injection. Patients will undergo two or more rounds of treatment.

If necessary, 12 months after the second course, patients may receive a third treatment course of 12 mg per day for three days in a row. A health care provider will monitor patients monthly after their first infusion to look for potential side effects. This monthly monitoring will continue for at least four years after the last round of treatment.

Researchers have not studied how alemtuzumab reacts with other drugs in people with MS. During clinical trials, patients treated with glatiramer acetate and beta interferon had to stop treatment about a month before starting Lemtrada.

Because health care providers administer the drug intravenously, interaction with food and drink are unlikely.

Lemtrada and Pregnancy
Lemtrada may harm fetuses. Women of childbearing age should use contraception during and for four months after a course of treatment.

Women of childbearing potential should use contraception during treatment and for four months after treatment because the drug may cause harm to an unborn baby. Researchers did not test the drug in patients younger than 17 years old or in enough patients older than 65 years old.

Patients with HIV should not take Lemtrada.

In clinical trials, two patients had serious reactions after a single accidental infusion up to 60 mg. There is no antidote for an overdose.

Researchers gathered data in two studies involving 1,191 people. The first was a two-year clinical trial comparing Lemtrada and another MS drug called Rebif. People in this trial had a previous MS relapse while on therapy.

The second study looked at people who had never taken an MS medication. In this study, alemtuzumab cut relapses by 55 percent and had 78% of patients who were free from relapse at 2 years compared to 59% who received Rebif.