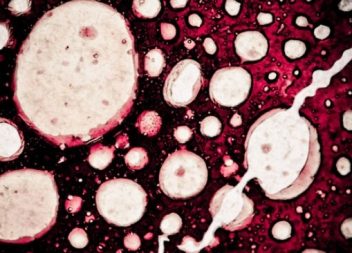 Researchers may have found the key to halting the spread of bladder cancer — and it’s a method that is similar to the one that controls prostate cancer.

Patients with aggressive bladder cancer are known to have high levels of the protein CD24, so scientists at the University of Colorado Cancer Center sought to reduce the amount of CD24 in those with the illness. They discovered that CD24 may be tied to androgens, such as testosterone, and removing the androgens stops cancer growth.

Results of the study were published this week in the Proceedings of the National Academy of Sciences.

“This is a major finding — bladder cancer development and spread to other organs depends significantly on CD24, which in turn depends on androgens like testosterone. By taking away these androgens, we may be able to greatly diminish the proliferative and metastatic power of bladder cancer cells,” said the study’s lead author, Dr. Dan Theodorescu, director of the University of Colorado Cancer Center.

Theodorescu and his team first studied bladder cancer tumors in mice and then human tissue samples. In both instances, the scientists noted the association between CD24 and the progressive growth of the cancer. They also noticed that the effect was most pronounced in male mice and male tissues, leading to higher rates of relapse and shorter periods of disease-free living.

“To us, these sex-specific findings implied androgen involvement,” Theodorescu said.

Unfortunately, diabetes patients who have taken Actos are at a higher risk of developing bladder cancer. Numerous studies have shown that taking Actos, also known as pioglitazone, to treat type 2 diabetes for a period of longer than a year can boost a patient’s risk of developing bladder cancer to as much as 62 percent higher than people in the general population who do not have diabetes.

The U.S. Food and Drug Administration (FDA) issued a safety alert in June 2011, warning consumers that the link between Actos and bladder cancer is much stronger than Takeda Pharmaceuticals stated in its clinical trials. Two months later, the agency required the manufacturer to update its package warnings accordingly.