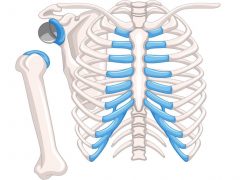 Zimmer Biomet recalled more than 3,600 implants in 2016 after reports of a “high fracture rate” with its Comprehensive Reverse Shoulder device. The first lawsuit over the implants’ fracturing was settled in early 2016 – nine months before the second recall was issued.

Shoulder replacements are surgically implanted devices that help restore arm movement. This is helpful for people who have tears to their rotator cuffs and have developed arthropathy, or severe shoulder arthritis.

A humeral tray attaches to a stem that has been inserted into the humerus, or upper arm bone. A bearing is then fitted to the tray to form the socket of the new joint.

The affected trays were distributed as late as September 2015.

The U.S. Food and Drug Administration categorized the action as a Class I recall, the agency’s most serious type.

In an Urgent Field Safety Notice, the company warned that fractures could require patients to undergo revision surgery which could cause serious health complications including infection, loss of shoulder function and death.

Zimmer Biomet said immediate health risks were not likely, but the devices posed long-term risks. The most likely and most severe risk was that people implanted with the affected models would need revision surgery sometime in the future if the component fractured.

That recall affected nearly 9,800 Distal Pilots, used in implanting Zimmer’s Trabecular Metal Shoulder, because they were not functioning properly, and the problem could prevent the implant from fitting appropriately to the arm bone. The problem could also lead to a delay in surgery, a bone fracture, or the need to alter the way the implant was attached.

Other recalls of reverse shoulder devices between 2010 and 2016 had not been so large. While different companies had recalled devices, for the most part, the numbers of actual units affected had been small.

Timeline of Manufacturers and their Recalled Devices

The FDA classified these other recalls as Class II – a situation where the device “may cause temporary or medically reversible adverse health consequences” or where there is a remote probability of serious health risks.

In a filing with the U.S. Securities and Exchange Commission, Biomet had reported that in 2013, “demand for the Comprehensive Shoulder System allowed us to achieve the leadership position in the United States in both the anatomic shoulder and reverse shoulder markets.”

But Zimmer’s acquisition brought it problems as well as anticipated profits.

Just a month before the 2016 recall, the FDA issued a lengthy list of potential violations at what prior to the merger had been a Biomet manufacturing plant in Warsaw, Indiana.

FDA inspectors looked over the facility between September and November 2016, before issuing a 58-page review of issues they found.

Inspectors said the plant lacked "established procedures" for such things as:

Inspectors also found the facility did not sample products based on a valid statistical model.

“While the Company is taking the necessary steps to address certain regulatory compliance gaps at the legacy Biomet operation in Warsaw, it remains confident in the quality, safety and efficacy of all of its products,” Zimmer Biomet said in a statement following the inspection. “No patient safety concerns have been identified with any of the products manufactured at the site.”

While undergoing physical therapy in 2012, the humeral tray separated from the stem in his left shoulder and Alarid had to have the implant replaced. In March 2013, the implant in his right shoulder failed in a similar fashion and it, too, had to be replaced.

Both of the devices were among the 47 Comprehensive Reverse Shoulder systems affected by Biomet’s September 2010 recall.

Alarid filed a lawsuit in state court in Colorado against Biomet in July 2014, before the company merged with Zimmer.

Did You Know?
A 2014 lawsuit claimed recalled Comprehensive shoulders were “defective and unreasonably dangerous.”

In his complaint, Alarid claimed that Biomet had received multiple reports of problems with the device. He also claimed Biomet had sold implants in “defective and unreasonably dangerous condition” that resulted in his injuries requiring two revision surgeries.

The case was moved to federal court in Denver in September 2015.

In February 2016, Biomet, by then a part of Zimmer Biomet, agreed to pay Alarid $350,000 to settle the claims against the company.

“Any product liability claim brought against us, with or without merit, can be costly to defend,” the company said in its