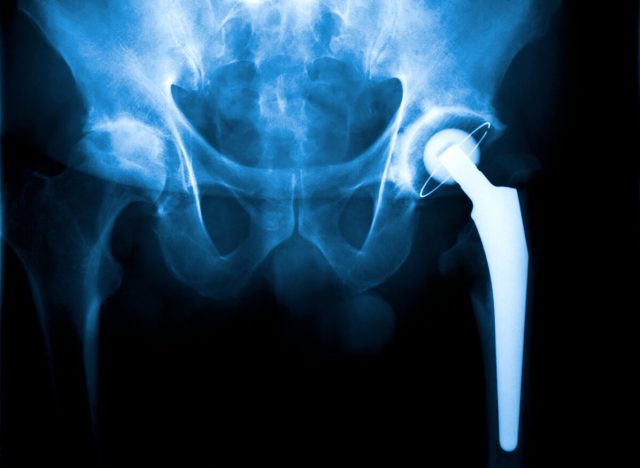 Michael Galgano’s doctor warned him not to fly to Chicago. His left leg was ravaged by metallosis, a form of metal poisoning that killed muscle and other tissue in his leg. He was diagnosed with it 17 months after having a hip replacement.

“I’ve had three dislocations after my first implant operation because they took out 80 percent of the muscle in my hip. There was nothing to hold it in place,” Galgano told Drugwatch.

His doctor warned him that a fourth dislocation at his age could kill him. The walk through the airport terminal, cramped airline seating and the ride to his lawyer’s office in Chicago all raised his risk of another dislocation.

But in October 2019, at the age of 94, Galgano went ahead and boarded the flight. He wanted to meet face-to-face with the corporate lawyers representing the company that made the hip replacement, which he blamed for wrecking his leg.

Galgano’s seven-year ordeal at that time had taken him through 39 doctors, 386 tests and 15 hip aspirations, according to his own records. He’d been part of the national mass litigation over Stryker AGB II hips. He and his lawyer were seeking more than the company wanted to settle for.

He said he had to go because he’d always been a fighter. Besides, even with the risk of a potentially fatal injury, this wasn’t the most dangerous flight Galgano had ever taken.

World War II was in full swing when Galgano volunteered for the U.S. Army Air Corps on his eighteenth birthday. He was a crewman on a B-17 “Flying Fortress,” the four-engine workhorse of daylight bombing raids against Germany. The planes weren’t pressurized, but open to the elements at high altitude.

Galgano estimated losses for his bomb group were almost 50 percent when he arrived in Europe.

“We hit over Berlin on three missions when it was the most protected city in the world,” Galgano said.

On bomb runs, thirty-six B-17s — each one bristling with 13 machine guns, hauling a 4,000 pound bombload and carrying a 10-man crew — would form up almost wingtip-to-wingtip to maximize their firepower against the German fighter planes swarming their formation.

Galgano was the flight engineer charged with keeping his plane’s engines and other critical systems running smoothly on the flight from England. But once the planes turned into their bomb runs, he manned the top turret — a Plexiglass bubble with two .50 caliber machine guns above the cockpit. He could turn it to target incoming fighters.

“But once you got over the target, the German planes would race away. Because the flak [anti-aircraft fire] was like a carpet — just black shell bursts ahead of you that looked like you could walk on it. But you had to fly through it and pray you didn’t get hit,” Galgano said.

Galgano’s personal battle with metallosis began nearly 70 years after WWII ended. At 87, he was still working out at his local YMCA in Maine.

“I was going to the Y three times a week, riding 5 miles on an exercise bike, plus a routine circuit,” Galgano told Drugwatch. “But my hip was beginning to bother me. It was clicking when I’d use the rowing machine.”

X-rays showed the cartilage in his left hip was almost gone and a sports medicine doctor recommended a hip replacement. Galgano had surgery in Rockport, Maine, on June 4, 2012. He expected the hip replacement to improve his life.

“They told me I’d be back at the Y in three months, but I’ve never been able to exercise since,” he said. “Three months after the operation, I couldn’t go 50 paces without having to stop and catch my breath.”

His family took him to an emergency room after one such bout of breathlessness. He’d developed lung and cardiac problems and needed a heart stent.
“How’d all that happen in three months?” Galgano asked.

For another 14 months after that, he was transferred from one specialist to another looking for a diagnosis. He eventually wound up at Massachusetts General Hospital in Boston. A doctor there was the first to mention that the AGB II hip implant might be causing metallosis.

Metallosis can cause heart and nerve problems as well as tissue damage around implants. He had those symptoms. It’s a form of metal poisoning linked most prominently to metal-on-metal hips. Metal parts in the implants, rubbing against one another, shed microscopic metal ions into patients’ bodies. With metal-on-metal hips, this happened when a metal ball rubbed against a metal socket.

But in the case of the Stryker AGB II, it was blamed on corrosion and fretting where two metal parts connected in the joint’s stem. Of the 39 different doctors Galgano saw, the orthopedist at Mass General was the first to realize that Stryker had pulled the model off the market because of this problem.

FDA and Stryker’s own documents show the company sent out a notice to pull the implant off the market in April 2012, more than a month before Galgano’s surgery. But the FDA didn’t announce the recall until July 26, six weeks after his surgery.

The implant Galgano received should have been pulled off the shelf and never used. It’s not clear why it wasn’t. But medical device recalls are not always thorough.

There’s no common system for medical device manufacturers to notify doctors or patients about medical device recalls. Patients may never find out they have a recalled device unless there’s a problem.

In the case of the Stryker AGB II, the company mailed out a “Field Safety Notice” to its distributors and to surgeons. It asked doctors to notify patients of the problem and to return unused hip implants.

It’s nowhere as thorough a system as automobile recalls.

If your car has ever been part of a recall, you might have received a letter in the mail telling you about the problem. That’s because when you register your car, its vehicle identification number, or VIN, goes into a national database. If there’s a recall, the manufacturer can quickly contact owners of affected cars. Or owners can check an online database and see all the recalls on their vehicle.

“Automatically, manufacturers are required by our laws to notify the car owner and the dealer of any recall of an automobile part. Are human beings not as valuable as automobiles?” Galgano asked.

In 2012, at the time of the Stryker recall, medical devices didn’t have a similar tracking system to help doctors or patients affected by recalls. The U.S. Food and Drug Administration has since created a unique device identifier system, or UDI. But it’s still relatively new and hundreds of thousands of older implanted devices are not part of that system.

Galgano has petitioned his members of Congress to require manufacturers to contact patients affected by recalls, but says he’s never heard back from any of them.

“It will never help me, but maybe it’ll help thousands of people being operated on every year and not told about dangers from recalled implants,” he told Drugwatch.

Galgano’s trip to Chicago was his third attempt at mediation with Stryker. He didn’t reach an agreement, but he’s still working with his lawyer.

In the meantime, he says he’s up to 15 hip aspirations — procedures where a doctor drains fluid from his hip to prevent infection.

“I’ll have a basketball shaped load of water around my hip because the damaged leg tissue throws off water. And every three months I have to go to the hospital and have them take out up to two liters to relieve the pressure,” Galgano said.

He keeps count of the years, the tests and the procedures he’s gone through. He thinks about the time he’s been away from the Y and the damage done to his leg. It brings back thoughts of his older brother who lost an arm in the Battle of the Bulge.

“He was my hero. He was the first fighter in the family. He lived to be 100. Passed away four years ago,” Galgano said.

And the teenager who flew 30 missions over Nazi-occupied Europe is still a fighter at 94.

“I’ve been fighting this battle for eight years now, and going through this ordeal,” Galgano told Drugwatch. “Sometimes I wonder with a little pain and aspirin if things wouldn’t have been better than the hip replacement.”