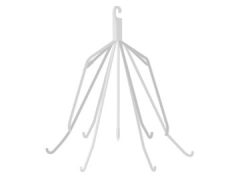 A federal panel combined lawsuits against each company into multidistrict litigations (MDLs) in order to move the lawsuits through the legal process more efficiently.

Bellwether trials — representative test cases used to determine possible settlements — were underway in both MDLs as of July 2018. Neither Bard nor Cook Medical has offered a global settlement. The companies have agreed to a few individual settlements for undisclosed amounts.

IVC filters are designed to reduce the risk of blood clots in people who are unable to take blood thinners. But people claim IVC filters punctured their veins, broke or moved, leading to serious IVC filter complications.

The filters are cage-like devices that are inserted through a person’s groin or neck. Spindly legs deploy inside the inferior vena cava — a large vein that carries blood to the heart — and trap clots before they can reach the lungs.

Lawsuits filed in federal court allege that defects in the design of IVC filters manufactured by Bard and Cook make them more likely fracture, migrate, tilt or perforate the inferior vena cava. In some cases, when the devices break, pieces can travel through the body, damaging the heart, lungs and other organs.

People who’ve been injured say the companies knew or should have known about the dangers but failed to warn doctors and patients of the risks.

Manufacturers and Brands Named in Lawsuits

IVC Filters Named in MDLs Include

People have also filed individual lawsuits against other IVC filter manufacturers. Companies sued include ALN, Argon, Boston Scientific and CORDIS. None of those lawsuits were part of any MDLs as of August 2018.

In 2015, NBC News linked Bard IVC filters to 39 deaths. The network’s investigation claimed that Bard executives had been aware of the risk for years but the company did nothing.

During its probe, NBC obtained a 2004 study commission by Bard that found the Bard Recovery IVC filter had a higher failure rate than competing devices.

NBC reported that company executives made copies available on a “need-to-know” basis and told those who read the report to keep it secret.

Did You Know?
In July 2015, the FDA sent a warning letter to Bard about its medical device reporting, stating the company had failed to report knowledge of a malfunctioning device that “would be likely to cause or contribute to a death or serious injury, if the malfunction were to recur.”

The first Bard bellwether trial resulted in a $3.6 million verdict for a Georgia woman. The jury awarded $1.6 million in actual damages and $2 million in punitive damages to Sherr-Una Booker.

Juries award punitive damages to punish a defendant — in this case, Bard — when their actions cause severe harm.

Booker’s lawyer argued Bard executives knew their product was dangerous but continued selling it without warning doctors about its risks.

Jones received a Bard Eclipse IVC Filter in 2010. Years later, doctors found that the filter had fractured, and a piece of it blocked her right pulmonary artery. Doctors could not remove the piece.

A jury concluded Bard’s warnings to doctors were adequate.

Bard has settled some individual IVC filter lawsuits for undisclosed amounts, but the company has made no global offer to settle all the lawsuits in the MDL.

Cook Medical won the first bellwether trial in its multidistrict litigation in November 2017.

The judge overseeing the Cook IVC filter MDL had scheduled a series of settlement talks between the company and people filing suits in 2015 in hopes of resolving the cases before trial. The following year, however, the judge moved forward with pretrial proceedings and selected the first bellwether cases in the MDL.

The judge threw out the second bellwether case, which, like the first, was submitted by Cook Medical, on the grounds that the plaintiff’s claim was time-barred. The statute of limitations for the breach-of-warranty claim was a year and a day.

Then in May 2018, a Texas jury awarded a $1.2 million verdict to Houston firefighter Jeff Pavlock, who claimed a Cook Celect IVC filter damaged his aorta and small intestine. The lawsuit was not part of the bellwethers.

Boston Scientific’s Greenfield filter is also named in lawsuits. There is no MDL involving Greenfield IVC filters, but lawyers have filed individual lawsuits.

A 2016 study published in the journal Cardiovascular Diagnosis & Therapy looked at IVC filter complications, including perforation, incomplete opening, migration and fractures. The authors cited an earlier study of Greenfield filter deployment problems, published in the Journal of Vascular and Interventional Radiology, which reported poor distribution of filter legs in 71 percent of placements.

Patients, doctors and manufacturers file the reports when they experience a problem. More than 500 reports came in during the first two months of 2018 alone.

In 2014, The FDA updated a 2010 Safety Communication advising doctors to remove retrievable IVC filters as soon as they are no longer needed. The FDA said the ideal time for removing IVC filters is between 29 and 54 days after implantation.

What kind of problems has your IVC filter had?
Thousands of IVC filters have been recalled because they were defective, failed to open, tilted or migrated. Be sure to let your attorney know if your device malfunctioned.

When was your IVC filter implanted?
Most people filing lawsuits had their IVC filters implanted before 2003. Your IVC filter lawyer will want to review your medical records to confirm the date of your procedure.

What company made your IVC filter?
C.R. Bard and Cook Medical are responsible for making the majority of IVC filters being named in lawsuits. However, people have filed individual lawsuits against other IVC filter makers, including Boston Scientific and Cordis. The surgeon who performed your procedure should be able to tell you who made your device.