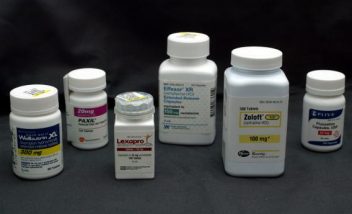 When prescribing the most popular class of antidepressants – selective serotonin reuptake inhibitors (SSRIs) – doctors usually start with the lowest recommended dosage. Then they monitor how patients respond for several weeks, which is how long it can take for the drugs to be effective.

If the medicines are not producing results, doctors typically and simply increase the dosage.

While that might seem logical from a layman’s standpoint, it is not necessarily in the best interest of the patient, especially since high doses of some SSRIs carry health risks and severe side effects.

High doses of SSRIs often increase the severity of side effects, such as headaches, sexual dysfunction and insomnia. Because these symptoms are not easily tolerated, patients must work with their doctors to realistically consider the physical cost of treating depression.

Are the side effects of antidepressants really worth it, if there is a possibility the patient might not even see a positive effect from taking the antidepressant? After all, research has shown that some 50 percent of those treated with antidepressants fail to get better.

Safety of High Doses of SSRIs

A concern over the safety of antidepressant dosages is nothing new. In August 2004, a consumer activist group called SSRI Citizen launched a national campaign to educate the public about serious risks linked to popular antidepressants. Its slogan, “Unsafe At Any Dose,” was intended to warn patients not to unquestioningly accept what doctors and pharmaceutical companies say about antidepressants.

Since that time, there have been numerous warnings by the U.S. Food and Drug Administration and successful lawsuits from consumers showing that drug companies are not always knowledgeable or truthful about the risks of their products and dosages. Clearly, any pharmaceutical product that carries inherent risks poses an even greater danger when dosage levels are raised arbitrarily.

The federal government knows about some of the SSRI risks. Among the alerts issued by the FDA was one in August 2011 that warned about the possible dangers of citalopram (Celexa).

The FDA said that it should not be used in doses higher than 40 mg per day because it had been linked to fatal changes in heart rhythm. Patients especially at risk are those who have heart disease and low levels of potassium and magnesium in the blood. Yet prior to the alert, the drug’s manufacturer indicated some patients could take dosages of 60 mg per day.

High dosage levels can lead to another kind of SSRI risk, too. Serotonin Syndrome can occur when SSRIs act alone or in conjunction with other medications.

In this often-fatal condition, the onset of the reaction can be within minutes, producing high blood pressure, hyperthermia, high body temperature and increased heart rate leading to shock.

Aside from risks that come from dosage uncertainties in SSRIs, other related issues can have health consequences for some patients, too.

One serious complication involves a reduced blood-clotting capacity in patients. Because of a decreased concentration of the neurotransmitter serotonin in platelets, stomach or uterine bleeding is an increased risk, as there is an increased need for a blood transfusion during or after surgery in those patients using SSRIs. Also, patients who use SSRIs and NSAIDs at the same time have double the risk of bleeding.

A study released in January 2012 found SSRIs were even to blame for an increased risk of falls suffered by nursing home residents with dementia. Published in the British Journal of Clinical Pharmacology, the study says the risks are dose-dependent; patients using average doses have three times the risk of those not taking SSRIs.

SSRI antidepressants can help many people who struggle with depression. But in light of all these potentially serious complications, doctors need to more closely monitor patients taking SSRIs, experts say.

One of the least discussed side effects of antidepressants is their addictive qualities. More often than not if someone has been on an antidepressant for any length of time they have developed a physical dependency to the drug. Coming off an antidepressant can cause worse depression than the patient had before they went on the drug.

One dose doesn’t fit all, and frequent follow-up visits are necessary to adjust dosage levels safely and successfully. Unfortunately, this isn’t always the case when two-thirds of antidepressants used in the United States are prescribed by primary-care physicians who aren’t critically attuned to patients’ needs and who often can be misled by pharmaceutical company claims.