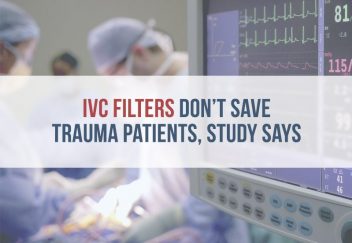 The study published in JAMA Surgery showed no decrease in death rates in patients who received IVC filters to prevent pulmonary embolism or deep vein thrombosis after trauma. To gather data, Dr. Shayna Sarosiek and colleagues at the Boston University School of Medicine reviewed information from 451 IVC recipients and 1,343 controls at Boston Medical Center.

Researchers found that IVC filters did not save a significant number of these patients and doctors removed just 8 percent of the filters after 3.8 years. This is a problem because the FDA recommends doctors remove these filters in about 60 days after initial placement.

IVC filters are small, spider-like metal cages placed in a patient’s inferior vena cava to prevent blood clots that form in the legs from traveling to the heart. Doctors use them to treat patients who cannot tolerate blood thinners. But this new study suggests doctors should rethink their use in trauma patients.

“The use of IVC filters in this population should be reexamined because filter removal rates are low and there is increased risk of morbidity in patients with filters that remain in place,” the investigators wrote. “Given the expected morbidity of long-term IVC filter use, filters should be removed as soon as a patient’s contraindication to anticoagulation resolves.”

In-hospital death of patients who received IVC filters was only 5.5 percent compared to 22 percent for the control group, however. But, patients who survived 72 hours after trauma with IVC placement did not have a lower mortality rate than those who did not.

“Overall, these data indicate that IVC filters should not be placed in trauma patients in an effort to decrease all-cause mortality,” study authors said.

Study authors also pointed out that long-term use of IVC filters has its risks.

Filter manufacturers such as C.R. Bard, Cook Medical and Boston Scientific now face lawsuits filed by patients who say the devices seriously injured them. Lawsuits point to studies that show these filters have high failure rates.

For example, 25 percent of Bard’s Recovery filters fractured or broke while inside patients. Another study showed all of Bard’s filters had a 12 percent failure rate. In studies, Cook Medical’s filters perforated patients’ vena cavas. They also migrated out of place in about 40 percent of patients.