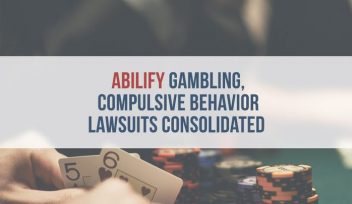 U.S. District Judge M. Casey Rodgers will preside over about 43 compulsive-behavior lawsuits in multi-district litigation in the Pensacola-based Northern District of Florida.

The Judicial Panel on Multidistrict Litigation issued the order to consolidate cases on Oct. 3, according to court documents. Key issues in the Abilify litigation include whether defendants designed or manufactured a defective drug and whether they knew about the medicine’s side effects and provided enough warning to patients.

In May 2016, the U.S. Food and Drug Administration (FDA) warned that it received reports of compulsive gambling, eating, sexual behaviors and shopping linked to Abilify. Pathological gambling was the most common behavior reported.

The Northern District of Florida had the “the necessary judicial resources and expertise to efficiently manage this litigation,” the Judicial Panel said in its order.

Plaintiffs who filed lawsuits against Bristol-Myers Squibb and Otsuka said the drug turned them into compulsive gamblers and sex addicts and ruined their lives.

Patrick Parks sued the drugmakers in November 2016. Parks began taking the drug around May 2013 and “began compulsively gambling shortly thereafter,” the complaint says. He stopped taking Abilify in August 2014, and stopped gambling. But, by then he had already lost more than $75,000.

Parks is not alone. Drugwatch received numerous emails from patients who complained of sex addiction, compulsive eating and gambling while on the drug.

“I went to the casino almost daily, went through thousands of dollars of my own, used money that was not mine, borrowed money from my boss, bounced checks to get money and missed several days at work due to all nighters at the casino,” one patient wrote in an email. “My losses due to gambling exceed $50,000.”

All these stories have one thing in common: After patients stopped taking Abilify, the behaviors stopped.

Doctors Use Abilify for Unapproved Uses

The FDA approved Abilify in 2002 to treat schizophrenia. Since then, the agency approved the drug to treat bipolar disorder and irritability associated with autism. It is also approved as an add-on medication to treat major depressive disorder.

But doctors also prescribe the medication for a long list of off-label uses, according to the Psychopharmacology Institute. These include anxiety disorders, dementia, eating disorders, insomnia, obsessive-compulsive disorder and post-traumatic stress disorder — none of which had clinical trials to show efficacy or safety.

The wide variety of uses, approved and off-label, helped propel the drug to the top of the prescription charts. In 2014, it was the bestselling drug in the world, pulling in $6.8 billion. In the U.S., the FDA reports doctors wrote 1.5 million prescriptions in 2015 alone.

That means more than a million Americans could be exposed to the drug and its side effects.

Thomas J. Moore, a senior scientist at the Institute for Safe Medication Practices, did extensive research on drugs like Abilify.

“We live in a society whose rules and laws assume people are responsible for their actions, including running up a large gambling debt,” Moore told the Daily Beast news website. “But we have scientific evidence that sometimes a drug can trigger a pathological urge to gamble so severe it can ruin someone’s life.”

Lawyers expect the number of lawsuits linked to Abilify to climb into the thousands.