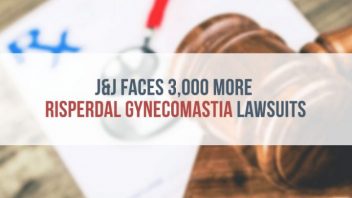 An additional 3,000 plaintiffs filed Risperdal (risperidone) gynecomastia lawsuits against Johnson & Johnson and Janssen Pharmaceuticals in 2017, bringing the total to more than 5,500, Forbes reported.

According to reports from the Philadelphia Court of Common Pleas, plaintiffs filed the suits in the first three months of 2017. About 80 percent of cases in the CLC come from out-of-state plaintiffs.

Philadelphia’s Complex Litigation Center Director Stanley Thompson told Forbes the CLC would “deal with [the lawsuits] in due course.”

Claims against J&J and its Janssen subsidiary say the drug giant failed to warn the antipsychotic Risperdal can cause gynecomastia — a condition where young men and boys grow female breasts. Plaintiffs suffered severe emotional damages and some had to undergo surgery to have breast tissue removed.

So far, juries ordered J&J to pay hundreds of millions to plaintiffs, including a $77 million verdict in Philadelphia in 2016.

Attorney Jason Itkin, who represented some Risperdal plaintiffs, said he could explain the sudden surge in lawsuits.

“Johnson & Johnson caused the increase in filings by cancelling tolling agreements on thousands of cases. Johnson & Johnson knew that its strategy would increase the number of cases filed and the burden on the Court,” Itkin told Forbes.

Tolling agreements pause the statute of limitations to file a lawsuit, and J&J actions indicated they wanted more lawsuits, not less, Itkin explained. He said the company cancelled the agreement after the $77 million verdict.

Jessica Castles Smith, a spokesperson from Janssen, denied the allegations.

“We do not have insight into plaintiffs’ choices regarding when and where they initiate lawsuits,” Smith said.

So far, eight Risperdal gynecomastia cases have made it to trial in Philadelphia. Four juries ruled in favor of the plaintiffs, and J&J was able to get the other four thrown out.

The first lawsuit filed by Austin Pledger of Alabama made it to court in 2012. The jury sided with Pledger, finding J&J and Janssen did not warn the drug could cause gynecomastia. It awarded $2.5 million to Pledger and his family.

After two other verdicts of $500,000 and $1.75 million in favor of plaintiffs, in 2016 a Philadelphia jury handed a landmark verdict of $70 million to Andrew Yount of Tennessee. Judge Paula Patrick added nearly $7 million in additional damages for a delay in proceedings.

Because of the cancellation of the tolling agreement, Itkin says the clock is ticking for similar Risperdal claims. People with prospective claims should contact an attorney as soon as possible so they don’t have their claims barred from court.