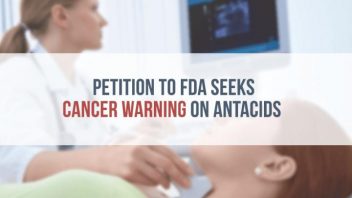 The Esophageal Cancer Action Network (ECAN) has petitioned the U.S. Food and Drug Administration asking it to order strong warnings on over-the-counter treatments that persistent heartburn can be a sign of increased risk of developing the cancer that annually kills 16,000 Americans — nearly 44 every day.

The group says the fact that over-the-counter medications are so effective at treating symptoms of acid reflux is actually contributing to the problem. That’s because patients don’t tend to tell their doctors about persistent heartburn as they are unaware of the cancer risk.

This 8th leading cancer killer is the fastest increasing cancer diagnoses among American men, up more than 600 percent in the last 35 years, ECAN says.

The petition requests the following “bold and prominent” warnings on all heartburn treatments:

Reflux Disease Can Lead to Cancer

According to the petition, up to 15 million Americans have heartburn every day, and when that happens more than once or twice a week, it can be a sign of gastroesophageal reflux disease (GERD). GERD involves stomach contents, including acid, splashing into the esophagus, changing cells in a way that can cause cancer.

About 3 million people in the U.S. have a precancerous condition called Barrett’s esophagus which increases the chances of developing esophageal cancer 125 times. “More than half of those with Barrett’s Esophagus are unaware they have the condition because it presents no symptoms,” the ECAN petition says. “That is why esophageal cancer is often only discovered when it has reached advanced stages when treatment outcomes are very poor.”

ECAN recently commissioned a poll that showed that only 14 percent of American adults are aware of the link between reflux disease and cancer, and when asked directly, less than 40 percent said they believed reflux disease could cause cancer.

Fewer than half of respondents identified common reflux symptoms — beyond heartburn — such as cough, sore throat, hoarse voice or choking when lying down.

“So many of our patients tell us that they took anti-reflux medications for years, but never knew they were at risk for cancer — until it was too late,” said Dr. John Lipham, chairman of ECAN’s board and director of the USC Foregut Institute in Los Angeles, California.  “We know we can save lives with increased awareness and early detection.”

ECAN says that available outpatient treatments can give excellent survival chances for patients diagnosed in pre-cancerous stages. But most of the time, cases are diagnosed too late when chances for survival are low.

A spokeswoman for one pharmaceutical company suggested existing warnings are sufficient. Michelle Meixell sent the Baltimore Sun a statement on behalf of AstraZeneca, which markets Prilosec, now available in its generic form omeprazole, and Nexium.

“AstraZeneca is confident in the safety and efficacy of Nexium when used in accordance with the FDA approved label, which has been established through numerous clinical trials,” the statement said.

The Sun also quoted a marketing professor at Loyola University in Maryland as saying drug companies are likely to resist warnings requested by a third party.  “It opens it up for others to come in and say that you need this on a label or that on a label,” Auburn Bell told the publication. “If they say yes to one, will they have to say yes to everyone?”

According to the FDA, there are three categories of over-the-counter heartburn treatments:

GERD is described as one of the most common health problems among adults.

Reasons for developing GERD include a malfunction in the muscle at the bottom of the esophagus, which is supposed to close to keep food and acid from getting back into the esophagus.