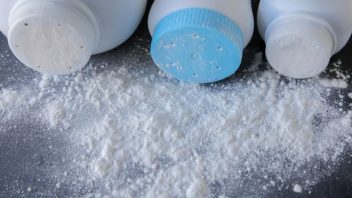 Juries in two states are hearing testimony in lawsuits by men who say they developed the deadly cancer mesothelioma from exposure to talc that contained asbestos.

One case involves personal use of baby powder. The other involves workplace exposure to industrial talc.

Complaints involving both types of exposure have been filed across the country. In the few trials conducted so far, juries have handed up mixed verdicts.

Questions about Asbestos in Talc Raised Since 1970s, says FDA

Mesothelioma is a rare cancer caused almost exclusively by exposure to asbestos. It forms in the thin protective tissue that covers the lungs and abdomen.

“Questions about the potential contamination of talc with asbestos have been raised since the 1970s,” according to the U.S. Food and Drug Administration.

The talc mesothelioma cases are separate from the thousands of lawsuits filed by women who say they developed ovarian cancer as a result of using Johnson & Johnson’s talcum powder on their genitals.

Some of those trials have ended in multimillion-dollar verdicts in favor of the women. Judges have overturned some of those awards.

Did you develop mesothelioma after being exposed to talcum powder? Get a Free Case Review

A new class-action investor lawsuit against Johnson & Johnson accuses the New Jersey company of failing to disclose that its talc products carry the risk of both mesothelioma and ovarian cancer. That lawsuit also says the company targeted black and Hispanic women to increase sales.

On its website, J&J argues that its talc products are safe.

“Since the 1970s, talc used in consumer products has been required to be asbestos-free, so Johnson’s talc products do not contain asbestos,” the website says. “The U.S. Centers for Disease Control and Prevention (CDC), which identifies potential risk factors for many diseases, has not identified talc as a risk factor for ovarian cancer.”

In an ongoing trial in New Jersey, Stephen Lanzo III, 46, says his lifetime of use of Johnson & Johnson’s Baby Powder caused his mesothelioma. Lawyers delivered opening statements for that trial on Jan. 29, 2018.

That trial is less than a mile away from Johnson & Johnson’s headquarters in New Brunswick, according to N.J.com.

Meanwhile in Florida, jurors on Feb. 22, 2018, heard opening statements in the case of Robert Lord. Lord sued Vanderbilt Minerals. He blames the company for his exposure to industrial products that contained talc while he worked for Florida Tile during the 1970s.

Lord says Vanderbilt failed to warn him adequately of the asbestos in their talc products and the health risks. According to Courtroom View Network, a similar trial in Florida in 2010 ended with the jury ruling for Vanderbilt.