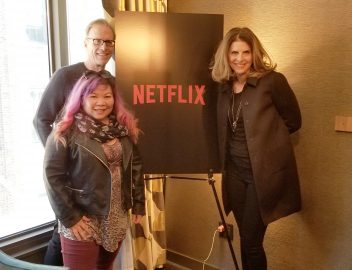 What happens when medical devices hurt or kill instead of save lives? This is one of the questions posed by the Netflix documentary The Bleeding Edge.

Unlike drugs, the majority of medical devices hit the market without extensive testing. Medical device companies make billions on products that may sacrifice safety for so-called innovation.

They earned an Academy Award nomination for The Hunting Ground, a documentary about sexual assault on college campuses. They explored the cover-ups and the shaming of victims.

In The Bleeding Edge, Ziering and Dick explore many of the same themes. In fact, Ziering said what happens to victims of medical device negligence is similar to what happens in the aftermath of sexual assault.

Ziering and Dick sat down with Drugwatch’s Michelle Llamas to talk about the film at the Tribeca Film Festival premiere in April 2018.

Drugwatch: How is The Bleeding Edge different from or similar to your previous work?

Amy Ziering: Well, it is extremely different in some ways.

Kirby Dick: But, similar in others.

AZ: Right. Similar in others. I guess it’s an extremely significant groundbreaking, original piece of research and investigative filmmaking. In that way, it’s…I mean our last few films also broke new ground. What is interesting and a little different about this is often documentaries will adapt a book or maybe something that happened in the past or they do a biography of someone or celebrity biography or they do concerts.

I think the different thing that we do is we find things that no one is taking about. No one’s done a book on it and no one’s done comprehensive research on it. So, you know, it’s a heavy lift, and it’s very heavy work. But it’s worked out where we are invested in it and doing it really, really well.

Drugwatch: Yeah, there is a lot of heavy lifting. You are going against medical device companies.

AZ: Yeah, they have pretty much been untouched. And you know, there was no coverage on what they are doing. They are free to do whatever with impunity. No public awareness.

Drugwatch: Your previous films, The Hunting Ground and The Invisible War, dealt with the controversial topics of sexual assault on college campuses and in the military. How is The Bleeding Edge similar to your previous work?

AZ: It’s very similar to sexual assault. We were doing that issue long before it was trending. And in The Invisible War — I mean whenever we would talk to someone, their commander would think it was just them. That it was their crazy problem, and they wouldn’t connect the dots, you know. And they wouldn’t understand that it is actually a serial predator problem. And that it is in their unit.

KD: And that is what those films did — The Invisible War and The Hunting Ground — they examined systemic problems. So we wanted to do the same thing here. And it is interesting. Another comparison is that many women, particularly who were harmed by the DaVinci robot, said it was like being raped. We didn’t put that in the film, but there was an interesting parallel.

AZ: It’s the same psychological phenomenon. “It is you. You are the exception.” Or, “It’s you. You just had bad luck.”

Drugwatch: You mentioned the whole aspect that it was like “being raped.” I am not sure if this was by design or anything, but so many of these devices and technologies in the movie seemed to affect women disproportionately. Do you guys think of it as a feminist issue at all, even slightly?

AZ: It is a general public issue, obviously. And men have as many devices as women statistically, and there have been many fails. Our film happened to focus on devices that were used on women, so in that way…but that is not to take away from the health…there is a movie to be made on the health care system which does have incredible gender biases that favor men and definitely punish and harm women disproportionately. So, that is not to be ignored.

KD: Obviously, more of the testing is done on men and the results are just extended to women. With different physiognomies, it makes a huge difference.

Drugwatch: At the very end of the film, it mentions that Bayer, Johnson & Johnson and Intuitive Surgical didn’t comment on the film’s findings. When you approached them to talk about it, what kind of reaction did you get from them? Did they feel threatened?

KD: We don’t know whether they feel threatened. They sort of controlled the narrative for a long time. The whole industry has around the fact that you know that these products are safe and effective and the newer products are safe and effective. And that is what we wanted to raise. We wanted to raise this issue of…innovation is not necessarily a good thing. Unless there has been testing done. So if you are a patient and somebody says this is a new product, you should stop right there and really investigate.

Medical device companies claim to be operating in the public’s interest. We see examples — millions of examples — when they are not, so hopefully this film will cause them to change their approach. I don’t know. In the past, we have had good luck. We’ve been successful.

“There is still a huge problem. But there have been changes directly as a result of the films, and we know that because those institutions have communicated them to us. Hopefully, the same thing will happen here.”

AZ: We had some very high-powered doctors view the film. And then about a month later, I ran into one of them. And he said, “I gotta talk to you. I want you to know you changed my practice. And it was a big, big deal.” I said, “What are you talking about?” He said, “Well, you know they sent me this device and normally that would be it.” They said, “This was great, put it into all your patients, infants included.” And I wrote back and said, “Show me the studies for infants.” They wrote back and said, “There are no studies.” And I wrote back and said, “So how can you tell me to put it in a newborn?” And they said, “Well, we did studies with 12 years and up.” And he said he would have never asked that question if he had never seen our film.

Drugwatch: You touched on a few devices in the film. Of course there are a bunch of them. How did you decide which ones eventually ended up in the film?

KD: Well, it was a real challenge because there are a lot of devices. And there are a lot of problem devices. I think we looked at between 25 to 50 devices and then we chose these for a lot of different reasons. We wanted to give a breadth [of devices], I mean we had diagnostic, we had surgical, we had implanted devices.

We wanted to let people know that it was in that entire range. You know, we felt there’s been a lot of reporting on hips and the problems with hips, but what hasn’t been reported on is the metal-on-metal corrosion that Dr. Stephen Tower is looking into. We felt this was an incredible story. This may be a story that people are writing about 10, 20, 30 years from now, and the fact that the story is broken in the documentary is pretty unusual. It’s an important story. I mean it has to be confirmed with additional tests, no question about it, but this is enough of a warning sign that I think this country and the medical industry and certainly the orthopedic industry should be looking at it really closely.

Hundreds of thousands of people in this country are getting implanted with hips, shoulders and knees containing cobalt. He has a patient that was diagnosed as having Parkinson’s because of a brain scan, and now after the hip is out (the hip containing cobalt) a subsequent brain scan shows that he has no evidence of Parkinson’s. And it’s reversible.

“Everything that people need to know is that the majority of studies that they think are so credible are studies done by the people making the device.”

AZ: There is an inherent conflict of interest. They should trust the outlier as much as they trust those because that guy has got no dog in the race. He’s not making money off this.

Drugwatch: What reaction do you think the medical device industry will have to the film?

KD: These companies have a long history of trying to discredit people who are telling the truth — doctors and patients. So, it wouldn’t surprise us if they try to do the same thing with this film. Because profits are threatened, there is no question. Their way of doing business and getting away with the way they do business is threatened, and it should be. Our position is that patients should come first, and they are not coming first right now. It is a challenge, and we wouldn’t be surprised if there is blow back.

Drugwatch: You have learned a lot of things that I am not sure if you knew before making this film. How does it change your opinion of the health care industry in general?

AZ: It’s horrible. It’s changed entirely. Knowledge is power, you know. I had two instances where I had to go to the emergency room with relatives recently, and like, my whole way of being, my whole vigilance, my whole questioning is radically different and for their benefit. I mean, it is sort of like…on a micro level I am grateful to make this movie. It was really, really, hard to do on many levels, but I hope that it does that for everybody that watches this film.

KD: I have a greater respect for the challenges that doctors face. Because they are not supported by the FDA, and they are not supported by these medical companies. And it hurts patients, but it also hurts doctors too. Because most doctors are trying to do the right thing. It is very complicated to be a doctor in the United States, and our country and these companies should be supporting them, not helping to put their patients at risk.

Watch an exclusive Q&A video from The Bleeding Edge premiere