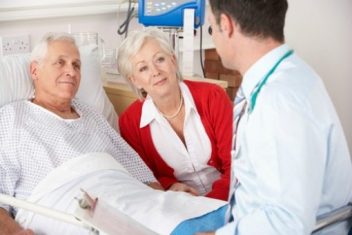 Approximately one-fifth of men who have prostate surgery will need to have a bladder sling implanted for severe urinary incontinence, a new study has found. In addition, the research shows, prostate cancer patients’ need for the incontinence surgery doubles between the five-year mark and 15-year mark after the initial operation.

The study was published in The Journal of Urology this summer and is the first to show that urinary incontinence can continue to be a problem long after a patient has recovered from prostate surgery.

“The risk of incontinence will continue and (will) increase from a cancer survivor’s perspective,” said lead author Dr. Robert Nam, from the University of Toronto.

Prostatectomy Can Lead to Incontinence Surgery

Nam and his team studied hospital and cancer registry data for more than 25,000 men in Canada who had had their prostate glands removed. About 5 percent of those studied had subsequent operations for incontinence.

The number of implanted bladder slings almost doubled over time: From 2.6 percent five years after the prostatectomy to 4.8 percent 15 years after prostate surgery. The need for incontinence surgery also doubled if a man’s prostate was removed after age 60, the study found. Furthermore, if the cancer patient required radiation after surgery, he was 50 percent more likely to need bladder sling surgery.

Nam’s study also points out that the expertise of the surgeon removing the prostate can radically affect whether a man will need a bladder sling. The more prostatectomies that a surgeon has performed, the better the chances the patient will not need additional operations. Patients of surgeons with more than 48 prostate removals per year were half as likely to need incontinence surgery as other patients.

During the delicate surgery to remove a man’s prostate, the surgeon can damage the sphincter muscles, which control the urethra, the tube that carries urine from the bladder and out of the body. In men, the external sphincter is located just under the prostate.

To counteract the injured muscle, a thin strip of material — made from either a synthetic mesh or a patient’s own tissues — is placed under the urethra and anchored on either side to hold the tube in place. The bladder sling generally can control many types of incontinence.

However, bladder sling surgeries in women have been linked to numerous painful and long-term complications. The most common are prolonged difficulty urinating and new symptoms of urgency. The most serious involve erosion of the synthetic mesh into nearby tissues and perforation into organs in the pelvic cavity.

The American Cancer Society estimates that 241,000 new cases of prostate cancer will be reported in the United States in 2012.