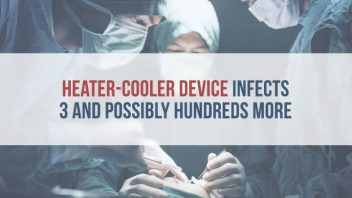 With these three new cases, the total number of infected patients rose to 20 statewide and hundreds of other heart patients could be at risk. The hospital linked the infections to heater-cooler devices used to regulate body temperature during surgery. The three patients had open-heart surgery at Penn Presbyterian Medical Center. A fourth tested positive for the bacteria, but did not show symptoms, Patrick J. Brennan — chief medical officer of the University of Pennsylvania health system — told the Inquirer.

“The U.S. Centers for Disease Control and Prevention (CDC) and the Food and Drug Administration (FDA) have notified hospitals about the risk of infection that has been linked to certain heater-cooler devices used in conjunction with the cardiopulmonary bypass machines during cardiac surgeries,” Volpe and Fosnocht wrote in the September 19, 2016 letter. “The infection that has been associated with these devices is known as non-tuberculous mycobacterium or NTM.”

These infections can be difficult to treat, and some strains have a mortality rate of about 50 percent.

Penn Medicine officials believe it is not likely that the bacteria will infect more patients, according to the letter. But, it said, “NMT is a slow-growing bacterium. It therefore it can take several months to several years for symptoms to develop.” Symptoms of infection include pain, redness, heat or puss from the cardiac incision, night sweats and unexplained weight loss.

The hospital said it followed all manufacturer instructions for cleaning and disinfecting the heater-cooler devices.

In October 2015, the FDA warned the public that heater-cooler devices may spread NTM infection. Since then, it has been monitoring adverse events and NTM infections associated with heater-coolers, particularly those related to Sorin Group’s Stockert 3T.

Some designs may be more likely to transmit the infection, the agency found.

“Air filters located on some units are not efficient enough to capture NTM bacteria. An air filter that has the capability to capture NTM bacteria may alter device safety or performance and would therefore need to be evaluated by each manufacturer as a possible mitigation technique before implementation,” the FDA said in a 2016 communication on its website.

While it did not name the Stockert 3T in its 2015 warning, the FDA released a separate warning specific to the device in 2016.

In June 2016, the FDA warned that studies linked one specific bacterium, M. chimaera, to the 3T model. It received reports of heart patients in the U.S. contracting the infection.

“M. chimaera is a type of nontuberculous mycobacterium (NTM) that may cause serious illness or death,” the agency said. “FDA believes these NTM infections associated with the 3T are rare.”