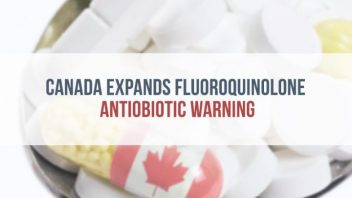 The action by Health Canada follows safety communications by the U.S. Food and Drug Administration advising health care professionals to only use antibiotics such as Cipro, Avelox and Levaquin as a last resort because the risks may outweigh the benefits.

A Summary Safety Review published by Health Canada on Jan 23 identified reports of persistent and disabling side effects. These side effects include tendonitis/tendinopathy, peripheral neuropathy and central nervous system disorders.

In addition to these side effects, Health Canada reviewed reports of known side effects linked to fluoroquinolones, such as:

In addition to these side effects, Health Canada reviewed reports of known side effects linked to fluoroquinolones, such as:

The Canadian agency said it would continue to monitor the safety of these drugs. It is currently working with the Drug Safety and Effectiveness Network (DSEN) and the Canadian Agency for Drugs and Technologies in Health (CADTH) to conduct additional studies.

About 26 million Americans take a fluoroquinolone antibiotic each year. Because they treat a wide variety of infections from sinus infections to anthrax, prescriptions skyrocketed over the past several years.

The Centers for Disease Control and Prevention estimates doctors write about half the prescriptions in the U.S. for viral conditions such as the flu or a cold, the Washington Post reported. These illnesses do not respond to antibiotics.

In July 2016, the FDA approved drug label changes to warn of “disabling and potentially permanent side effects and to limit their use in patients with less serious bacterial infections.”

According to the FDA, the disabling side effects involve “tendons, muscles, joints, nerves and the central nervous system.” The agency warns “these side effects can occur hours to weeks after exposure to fluoroquinolones and may potentially be permanent.”

The latest studies on fluoroquinolones link them to dangerous aortic aneurysms (ruptures) and aortic dissections (tears). Researchers suspect the drugs break down the body’s collagen, a substance that makes up tendons and the lining of the aorta.

Thousands of Adverse Events and Lawsuits

RxISK.org, an independent site run by researchers, combed the FDA’s data over the course of 10 years. It found 80,000 adverse drug reactions possibly associated with Levaquin and generic levofloxacin, including 1,000 deaths. For Cipro and generic ciprofloxacin, the total was 79,000 adverse events including 1,700 deaths.

Thousands of patients document their fluoroquinolone injuries across the internet on patient forums. Some filed lawsuits, claiming drugmakers failed to warn about serious side effects.

At one time, Johnson & Johnson faced several thousand lawsuits over Levaquin. Some are still pending before Judge John R. Tunheim in Minnesota. A separate multidistrict litigation for other fluoroquinolones — also before Judge Tunheim — currently has more than 700 lawsuits.