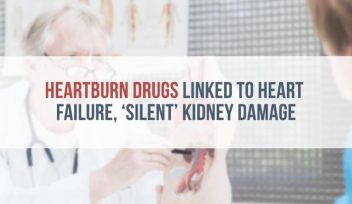 The first study, published in PLoS One by Anna Maria Pello Lazaro and colleagues looked at 706 patients with coronary artery disease (CAD). About 431 of these patients took PPIs, most commonly Prilosec (omeprazole), to control stomach problems from CAD medications.

But, patients who took PPIs had a higher risk of heart failure and death that those who did not, about 14.65 percent versus 5.45 percent.

“The present work shows that PPI use is an independent predictor of [heart failure] or death. Although there are no previous studies reporting this association, it is known that pantoprazole may exert negative inotropic effects on isolated myocardium from humans and rabbits,” study authors wrote.

While there was an increase in heart failure and death, researchers did not find an association between the heartburn drugs and ischemic stroke.

In the U.S., about 15 million people take prescription PPIs such as Nexium, Prilosec, Prevacid and Protonix, and many more take over-the-counter acid-reducing drugs.

But recently, more studies linking the drugs to serious side effects are surfacing.

Are you suffering from side effects after taking a proton pump inhibitor? Get a Free Case Review

In addition to the link to heart problems, a 2017 study published in Kidney International found PPIs may cause kidney damage without immediate symptoms.

Previous studies already linked the heartburn drugs to serious kidney problems. But, the study by Yan Xie and colleagues at Washington University School of Medicine in St. Louis and the Veterans Affairs St. Louis Health Care System found that some types of PPI kidney damage may be more difficult to diagnose without symptoms.

The study involved 125,000 patients. More than half of them suffered chronic kidney damage from PPIs, but didn’t experience acute kidney problems to warn them of the decline in kidney function.

“Our results indicate kidney problems can develop silently and gradually over time, eroding kidney function and leading to long-term kidney damage or even renal failure,” said Dr. Ziyad Al-Aly, the study’s senior author. “Patients should be cautioned to tell their doctors if they’re taking PPIs and only use the drugs when necessary.”

Because of side effects such as heart problems and kidney damage, a number of people who took PPIs ended up filing lawsuits against drugmakers.

A man who suffered kidney disease requiring a kidney transplant filed the first Nexium lawsuit in May 2016.

Currently, a handful of Nexium lawsuits are pending in federal multidistrict litigation in Massachusetts before Judge William G. Young. Lawsuits allege AstraZeneca did not adequately warn the public about the drug’s side effects.