Pneumonia Risk with PPI Use Continues Past One Year, Researchers Say 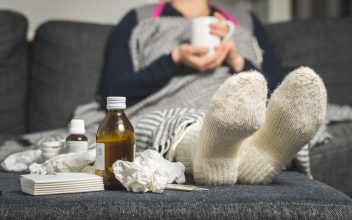 Adults who take proton pump inhibitors (PPIs) for longer than one year have an 82 percent greater risk of developing pneumonia than adults who don’t take the acid-reducing drugs, new research shows.

Researchers in England collected the new data on PPI drugs. The class of medicines includes Nexium, Prilosec, Prevacid and Protonix. Over 75,000 people ages 60 years and older participated in the study.

More work needs to be done to eliminate biases in PPI prescribing, researchers concluded. The 2018 study may include data for hospitalized patients who were given PPIs while being treated for pneumonia already. A future study could exclude those patients.

PPIs and Pneumonia: Is It Old News?

Studies previously associated PPIs with an increased risk of pneumonia in older adults. But prior research mostly focused on the first 30 days after starting treatment.

The science behind the link is that stomach acid is believed to be important in helping the body defend against ingested bacteria.

Past studies revealed that people who are hospitalized are more susceptible to the effects of PPIs. These effects include the increased risk of pneumonia.

The new research shows that this risk specific to older adults is not short-lived or exclusive to those who are hospitalized.

Risks of Long-Term PPI Use

Other studies highlight different long-term PPI side effects. And these risks are not exclusive to older adults.

Are you suffering from side effects after taking a proton pump inhibitor? Get a Free Case Review

A recent study showed an association between giving babies PPIs and the development of serious risks later in life. These children were shown to have a greater risk of developing food allergies and other allergic diseases like asthma.

A 2017 study also showed a link between infant PPI use and an increased risk of bone fractures later in life.

PPIs have also been associated with a higher risk of death overall.

Potential side effects of long-term PPI use include

More than 4,500 PPI lawsuits claim that patients experienced serious kidney problems after taking PPIs. The first lawsuit is set to go to trial in September 2020.