Nexium and Aspirin No Miracle Cancer Shield After All 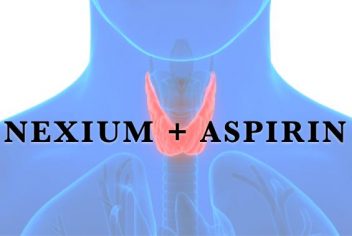 Headlines this month declared that a daily dose of Nexium and aspirin “can prevent esophageal cancer.” It sounded too good to be true. And it was.

After the news broke earlier this month, researchers walked back the claims. And it was a long walk.

The news came out of the American Society for Clinical Oncology’s annual meeting. Researchers presented a study looking at Nexium and aspirin use. The society sent out a news release overselling the findings.

The society heavily revised the statement days later. A Nexium and aspirin combination no longer “prevented esophageal cancer.” But it might “moderately reduce” the risk in certain patients.

Nexium is one of the most profitable drugs of the last quarter century. It has racked up $72.5 billion in sales in the past 25 years for AstraZeneca. The lead researcher in the Nexium-aspirin study received research funding from AstraZeneca.

Nexium and Aspirin: Getting the Story Right

The study looked at people with Barrett’s esophagus. Patients took high doses of Nexium and low doses of aspirin.

Are you suffering from side effects after taking Nexium or another PPI? Get a Free Case Review

Researchers studied patients who took the combination for at least seven years. They found in those cases, it could moderately reduce certain risk factors. These included esophageal cancer and other risks of death from Barrett’s esophagus.

Researchers in the study did not detail what role aspirin played. They found no aspirin benefit in their first analysis.

But then they looked at patients’ previous NSAID (nonsteroidal anti-inflammatory drugs) use. After adjusting for that, they reported a “weak effect” with the aspirin regimen.

A different study from 2017 found no evidence of PPI use alone preventing esophageal cancer. The researchers in that study suggested doctors reconsider using PPIs to prevent cancer.

Nexium Among Most Misused Drugs

As much as 60 percent of people taking them would be better off taking a different medicine.

Medical groups recommend PPIs like Nexium to treat the condition. But the American Society for Clinical Oncology stressed that people should seek treatment under a doctor’s guidance.

Learn more about the misuse of PPIs

The study looked at medical records for more than 796,000 Swedes. It included every adult in the country who underwent PPI therapy during a seven-year period.

It was the largest study that ever looked into the link between PPIs and esophageal cancer. Researchers in the Swedish study urged caution for long-term PPI use. They also said their findings may change the way doctors look at prescribing PPIs.

Esophageal cancer is not the only serious condition with ties to PPIs. Other serious PPI side effects include kidney disease, kidney injury and kidney failure.

Kidney problems have led more than 4,000 people to file PPI lawsuits. The lawsuits are in the very early stages.