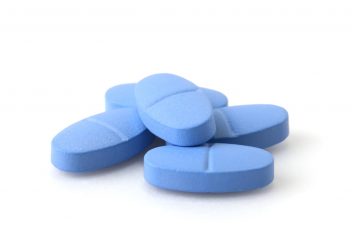 It’s not as expensive as it used to be to get the benefit of the little blue pill.

Erectile dysfunction drug Viagra is now available in two generic forms, and they cost less than half as much as the brand-name medication.

One of the makers of the generic Viagra is Greenstone, a subsidiary of Pfizer, which makes the brand-name drug as well. The Israeli company Teva is also making a generic sildenafil, the active ingredient in Viagra.

Greenstone’s version of Viagra is being manufactured in the same plants where Viagra is made, the company says.  It has taken several steps to prevent counterfeiting.

A single, brand-name pill can fetch more than $70 at some chain pharmacies, while a generic sildenafil pill can be bought for a $25.51 at Walmart, according to the drug pricing website GoodRx.com.

According to the Urology Care Foundation, drugs like Viagra, Levitra and Cialis boost the body’s natural signals during sex to help men have “a better erection that lasts longer.” They relax the muscle cells in the penis, improving blood flow. Nearly 80 percent of men who use them show improvement.

CBS News reported that even more generic versions of Viagra are expected to go on sale next year, further pushing the price down for the drug, which was first introduced in 1998. It was the first drug approved to treat erectile dysfunction.

“The launch of Teva’s sildenafil tablets brings an affordable generic treatment option to the estimated 18 million men in the U.S. who are diagnosed with erectile dysfunction,” Brendan O’Grady, executive vice president, North America Commercial at Teva, said in a news release. “Our team has made it a priority to ensure that patients are able to access this medicine — through both traditional and more innovative channels.”

Regulators in the United Kingdom have approved an over-the-counter version of the drug.

Also in the UK, an online pharmacy announced in August that it was planning on delivering Viagra by drone.

According to a report in Medscape, Pfizer doesn’t actually lose its patent protection for Viagra until 2020, but under a legal settlement with Teva, it’s allowing the earlier launch of the generic drug.

Before taking medication for erectile dysfunction, medical experts recommend seeing a doctor. Medications can aggravate some conditions, such as diabetes. They can also be dangerous when taking nitrates or for patients with heart disease, heart failure or low blood pressure.

A doctor can also determine if you have any underlying conditions that cause or contribute to your erectile dysfunction.

Viagra has been linked to a number of serious side effects, including skin cancer, sudden vision loss, irregular heartbeat, hearing loss or decrease, heart attack, stroke and death. It is also linked to a dangerous condition called priapism, which involves an erection that can continue for long periods of time.